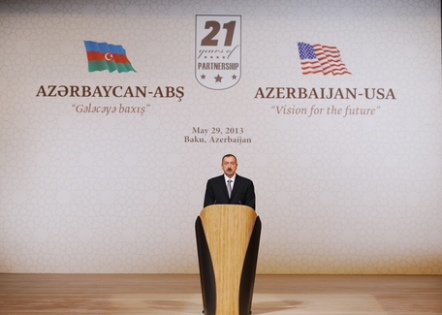 The "Azerbaijan-US: Vision of the future" forum has kicked off today in Baku.

Azerbaijani President spoke about the US-Azerbaijani relations. He said that economic and security issues are on the front burner in the bilateral relations: “We have close cooperation in the field of security and Azerbaijani servicemen are participating in peacemaking processes in Afghanistan. 40% of cargo is transported to Afghanistan through Azerbaijan and it is the safest route. Azerbaijan also contributes to combating counterterrorism.”


The President noted with regret that though the United States plays an important role in resolution of the Nagorno-Karabakh conflict, there are still no results in this sphere. "We believe that this issue will be solved peacefully within the OSCE Minsk Group."

President said it is underlined on the level of US leadership that the status quo is unacceptable, noted that the Nagorno Karabakh conflict is a threat to the international security: “During the USSR, Armenians put forward territorial claims against Azerbaijan, pursued aggressive policy and committed genocide against the Azerbaijani people. Several states of the US have already recognized the Khojaly genocide.”

President underlined that the solution of the conflict will result in the development in the South Caucasus.

The Head of State said Azerbaijan is the leading state in the Southern Gas corridor project and underlined that the project is also supported by the US.

“This project will play an important role in Europe`s energy security. This is important for the diversification of energy sources. We have discovered giant gas fields. I think that Azerbaijan-US relations are as important as they were in the middle of the 90s,” he said.

President noted that Azerbaijan has become a cosmic country and launched its satellite this year. He underlined that Azerbaijan is an area of fully free media and internet, the number of Internet users is increasing.

“Not every country is an area of fully free Internet. Political reforms are on our agenda. These reforms should be completed with social and economic achievements. We have great prestige among Islamic countries. Moreover, we have close relations with the Council of Europe,” he said.


Noting that the US always supports Azerbaijan, President said the Forum will contribute to developing cooperation between the two countries.


Video on Azerbaijan was demonstrated following this.

Following the event, a video on Azerbaijan was demonstrated.

The Forum continues in plenary sessions.