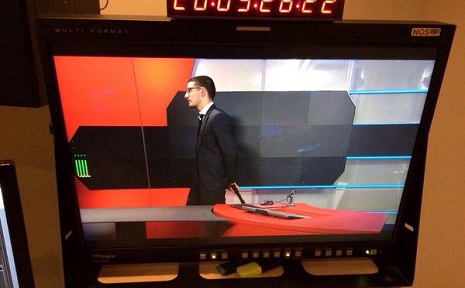 A 19-year-old man brandishing a fake gun was arrested on camera Thursday after he got past security and into the studios of Dutch national TV, where he demanded air time to make a statement, authorities and the network said.
The evening newscast Journaal was canceled and the message "One moment please" aired for more than a half-hour as Nederlandse Omroep Stichting, or NOS, the Netherlands` public broadcaster, was evacuated about 8 p.m. (2 p.m. ET), the network said. A NOS employee directed the man to an unused studio at the network`s Mediapark facilities in the city of Hilversum, southeast of Amsterdam, where he surrendered to police. There were no reports of injuries.

NOS broadcast video and tweeted a photo of a well-dressed man in a black jacket and glasses and carrying what appeared to be a handgun in the network`s news studios:

In the video released by NOS, the man says: "The things that are going to be said — those are very large world affairs. We were hired by the security service."

NOS said late Thursday that the gun wasn`t real. Prosecutors and police said the suspect, a 19-year-old man from Pijnacker in South Holland province, about halfway between Rotterdam and The Hague, was being held on suspicion of making a threat, possession of a weapon and taking a hostage. They wouldn`t say anything else about him, including his possible motive.

NOS published a letter it said the man was carrying, in which he claimed to be part of a team of five people "plus 98 hackers" planning a cyberattack. According to NOS, the letter warned that eight radioactive explosives that had been dotted around the Netherlands would be set off if he wasn`t allowed to go on the air to discuss issues "that challenge today`s society."

The country`s security and justice minister, Ivo Opstelten, told the Dutch news agency ANP, however, that the man apparently was acting alone. Authorities said they didn`t believe the man had any terrorist links, and they declared the NOS studios safe after about two hours.

Hilversum Police Chief Andre Wielandt said officers were able to respond quickly "because of what happened in Paris," a reference to the attack Jan. 7 on the offices of Charlie Hebdo magazine, in which 11 people were killed. Hilversum Mayor Pieter Broertjes said the city formed a "special media team" after the Paris attack because journalists had become targets.

Hilversum has been on its highest state of alert since the Paris attack, Broertjes said, but "obviously, more security is needed."