"Hostile to privacy": Snowden urges internet users to get rid of Dropbox 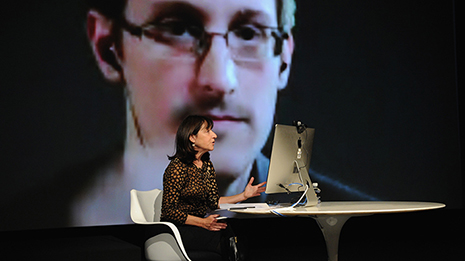 General view of atmosphre at Edward Snowden Interviewed by Jane Mayer at the MasterCard stage at SVA Theatre during The New Yorker Festival 2014 on October 11, 2014 in New York City

Edward Snowden has hit out at Dropbox and other services he says are “hostile to privacy,” urging web users to abandon unencrypted communication and adjust privacy settings to prevent governments from spying on them in increasingly intrusive ways.

“We are no longer citizens, we no longer have leaders. We’re subjects, and we have rulers,” Snowden told The New Yorker magazine in a comprehensive hour-long interview.

There isn’t enough investment into security research, into understanding how metadata could better be protected and why that is more necessary today than yesterday, he said.


In particular, Snowden advised web users to “get rid” of Dropbox. Such services only insist on encrypting user data during transfer and when being stored on the servers. Other services he recommends instead, such as SpiderOak, encrypt information while it’s on your computer as well.

“We`re talking about dropping programs that are hostile to privacy,” Snowden said.

The same goes for social networks such as Facebook and Google, too. Snowden says they are “dangerous” and proposes that people use other services that allow for encrypted messages to be sent, such as RedPhone or SilentCircle.

The argument that encryption harms security efforts to capture terrorists is flawed, even from a purely legalistic point of view, Snowden said, explaining that you can still retain encryption and have the relevant authorities requesting private information from phone carriers and internet providers on a need-to-know basis.

And the penchant for close, secretive cooperation with the government will only cost companies money and jobs, Snowden added, because no one would want to buy a phone made by a company that provides inherent backdoors for third parties to access your information.

“The same rights that we inherited our children deserve to inherit the same way,” Snowden said.

“But ultimately we have to remember that political reform in the United States is not going to solve the problem globally. Governments [everywhere] are going to have their own national laws. And these can be terrible governments… so, because of that, you have to use secure communications… the real key is that companies willing to collaborate with the government and compromise their products and services do not deserve to be trusted with your data. Because if they do it for one government, they’ll do it for another government,” Snowden said.

For consumers to retain trust in the services they use, they need to fight for the very idea of privacy, to keep the topic in focus, he said, adding: “I speak with computer scientists and cryptographers every day to try to figure out how we can create solutions” for metadata to be appreciated and viewed as someone’s own private business.

“There are solutions, there are ways forward, and we need to pursue them, to work toward them,” Snowden said. “And we need to say that this is an effort worth doing.”

The whistleblower continues to lead a secretive existence in Russia, where he’s been stranded since June 2013, hiding from his own government, which is seeking to prosecute him for his crimes behind closed doors.

“I’ve told the government again and again in negotiations, you know, that if they’re prepared to offer an open trial, a fair trial in the same way that Dan Ellsberg got, and I’m allowed to make my case to the jury, I would love to do so,” Snowden said. “But to this point they’ve declined.”

The whistleblower believes one fallacy in how authorities view individual rights has to do with making the individual forsake those rights by default. Snowden’s point is that the moment you are compelled to reveal that you have nothing to hide is when the right to privacy stops being a right – because you are effectively waiving that right.

In that situation, it becomes OK to live in a world where one is no longer interested in privacy as such – a world where Facebook, Google and Dropbox have become ubiquitous, and where there are virtually no safeguards against the wrongful use of the information one puts there.