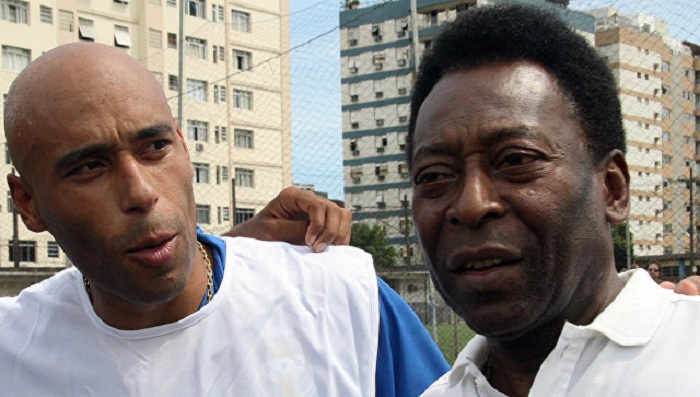 The son of Brazil`s footballing legend, Pele, has handed himself in to complete his sentence for money laundering and drug trafficking.

Edinho, a former professional goalkeeper, was first arrested in 2005 over the charges, but appealed.

He remained free during the appeal but was sentenced in 2014 to 33 years.

The court has reduced that sentence to 12 years and 10 months, but ruled that he must be imprisoned while he appeals. Edinho denies all the charges.

As he arrived at a police station in the city of Santos, he said there was not a shred of evidence against him.

"I`m frustrated because I`m being massacred by the legal system," he said.

"I never had any involvement with money laundering."

Four other people have also been sentenced in the same case, including a man accused of controlling much of the drug trafficking in the Greater Santos region - Ronaldo Duarte Barsotti, known as Naldinho.

`Justice will be done`

Edinho, whose real name is Edson Cholbi do Nascimento, admits that he once had a drug problem but says he has been clean for many years.

He played as goalkeeper in the 1990s for Santos, where his father spent all his professional career in Brazil.

He had been working as a manager of a small club in the state of Sao Paulo.

Pele, or Edson Arantes do Nascimento, retired in 1974, but made a comeback a year later for New York Cosmos.

Playing for Brazil, he won the World Cup in 1958, 1962 and 1970 and was acclaimed as the greatest footballer of his generation.

Edinho was five when Pele was signed to play for Cosmos and the family moved to New York. He is now 46.

When he returned to Brazil he decided to pursue a career in professional football - as a goalkeeper, much to his father`s surprise.

He was Santos`s goalkeeper in 1995 when the team reached the Brazilian league final, losing the title to Botafogo.

His detention and alleged involvement with drug gangs took most people in Brazil by surprise.

Pele, who is now 76, went to visit his son several times in jail.

"God willing, justice will be done. There is not a shred of evidence against my son," he said in 2006.