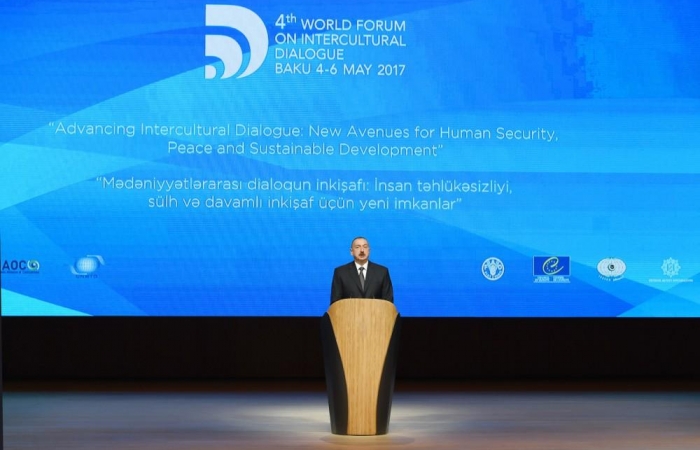 President of the Republic of Azerbaijan Ilham Aliyev is attending the 4th World Forum on Intercultural Dialogue being held in Baku.

***
President of Azerbaijan Ilham Aliyev welcomed the guests, thanking them for participating in the forum.

President Aliyev reminded that six years ago the initiative to organize the forum was proposed, and the forum was held in Baku for the first time.

"Since that time, the forum has transformed into a global international event, addressing one of the most important issues on the global agenda - intercultural dialogue," said the president.

He went on to add that every international event, every forum, its importance is judged not only by the topics of discussions, but also by the list of participants.

"We are very happy that more than 800 guests representing more than 120 countries are participating today at the forum," said the president.

"We are proud that the number of partners of the forum, organizations, which are organizers of the forum is also growing," Ilham Aliyev said, adding that the government of Azerbaijan is is organizing this forum in partnership with UNESCO, United Nations Alliance of Civilizations, ISESCO, The Council of Europe, World Tourism Organization.

"I am sure that the discussions and exchange of views during the forum will contribute to promotion of intercultural dialogue," the President continued.

"Azerbaijan, for centuries was a place where civilizations and cultures met. Our geography, our history and development in Azerbaijan demonstrate that intercultural dialogue is one of the most important issues," said President Aliyev, adding that without it, the world would be a much more dangerous place.

"Our history, our traditions, our geography actually dictated that Azerbaijan could be and should be an area where civilizations meet," the president said.

"And for centuries, people inhabited in Azerbaijan, are living in a diverse environment. Multiculturalism, ethnic and religious diversity is our history and today's reality. And we're proud of that. Today Azerbaijan is a multi-ethnic, multi-confessional country, and representatives of all the ethnic groups and religions live in peace and harmony," President Aliyev said.

He went on to add that the country's historical monuments also clearly demonstrate the cultural diversity of Azerbaijan and its ancient history.

"In Baku, the Fire Temple which belongs to religion of Zoroastrianism, also demonstrates our cultural and religious diversity. Today, mosques, churches, synagogues which exist in Azerbaijan are protected by our state and many of them were built with the state financing. It demonstrates our history and also our policy," said the president.

President Aliyev went on to add that multiculturalism is a state policy in Azerbaijan, and at the same time, a lifestyle in the country.

President Aliyev noted that in 2011 the decision to organize a forum that would address intercultural dialogue, was motivated by Azerbaijan's history, realities and also by wish to create a broad format to address these issues.

"Today we need to do it maybe more than ever before, because unfortunately, now some concerning tendencies in the world lead sometimes not to intercultural dialogue, but to alienation. We see it regularly that in different parts of the world - conflicts, confrontations, civil wars are generated by lack of understanding between representatives of different religions and ethnic groups," said the president.

President Aliyev went on to say that Azerbaijan's policy of multiculturalism is fully supported by the country's people.

"The combination of these two events is important element of Azerbaijan's day to day life," the president said. "First of all it demonstrates the status of our society, our state policy and also leads to more understanding in the region."

"Five times already Azerbaijan has organized the International Humanitarian Forum. Several years ago we organized the World Religious Leaders summit. Last year, the seventh Global Forum of Alliance of Civilizations was very successfully held in Baku, and of course, for the fourth time we've gathered to address the issues of intercultural dialogue, said the President.

"All this helps us to find ways how to reduce tensions, how to reduce risks, how to create better understanding between peoples and religions," said the president.

"I think that history of Azerbaijan and its today's development are good examples that it is possible to achieve success," he said.

The president went on to say that there are different views on multiculturalism.

"We sometimes hear from different public figures, politicians, country leaders, different skeptical views on that. I think that if we unite our efforts -- and today representatives of absolute majority of international community are here -- we can demonstrate and prove that multiculturalism is alive," President Aliyev said.

"Multiculturalism is not only a trend, it is the only way to show how to make the world safer, and I think that your presence at this forum and the topics of discussions clearly demonstrate our common will and our policy, our approach to promote these values," he said.

President Aliyev informed the quests that in 2008 the country initiated a very important process that was later labeled the "Baku Process", which is now highly appreciated by the international community.

According to the president, this initiative was backed up by the fact that Azerbaijan is one of the very few countries that are members of both the Islamic Cooperation Organization and the Council of Europe.

"This was the first time when such a big gathering of representatives of more than 100 countries came together to address important issues of intercultural relations," said the president.

"This initiative and this format was later called the Baku Process. We're proud of that, first of all, because it was our initiative, second, because Baku deserves to be the center of intercultural dialogue," said the president.

"Next year we will celebrate the 10th anniversary of the Baku Process. The government of Azerbaijan and the United Nations Alliance of Civilizations launched an initiative to create a "Baku Process Award" for leadership in cultural dialogue, which will be presented to those, who play a very active role in promotion of the dialogue of cultures and culture of civilizations," said the president.

The president went on to say that another important initiative launched by Azerbaijan was the organization of the European Games in Baku.