John Kerry: U.S. have a serious interest in settlement of the Nagorno-Karabakh conflict 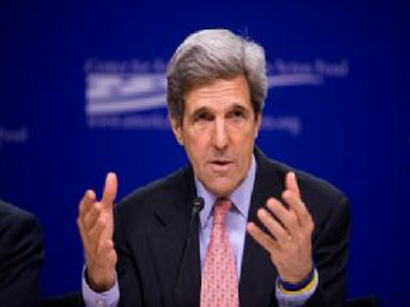 U.S. Secretary of State John Kerry has met with Azerbaijan Foreign Minister Elmar Mammadyarov on framework of American Jewish Committee Global Forum, said in report, published on official website of Secretary of State.
Azerbaijan is a wonderful statement about the ability of different religions, different sects to come together and live together and to find a way forward, Kerry said.

According to him, Azerbaijan has been an important partner in Afghanistan, in ISAF, and equally important with respect to the northern distribution route but also the southern gas line and other issues that are of great importance to us.

Kerry underlined, that he have had occasion to talk with the President about Nagorno-Karabakh. According to him, this is conflict one that threatens the stability of the region and one that we need to deal with.

"As co-chair of the Minsk Group, we have a serious interest - the United States - in helping Azerbaijan and Armenia to be able to find a path forward. The last thing we want is a return to war and to conflict", Kerry said.
"We are going to work on that and we are going to have a good discussion in a few moments about a number of these issues", Kerry added.

"We consider Azerbaijan as a partner, your strategic partner, taking the consideration what Mr. Secretary said about the agenda of our cooperation with the United States and all of the issue which was indicated is definitely of the strategic nature", Mammadyarov said.

According to him, Azerbaijan believes that, together with the U.S. will solve all the problems, in particular, the settlement of the Nagorno-Karabakh conflict.