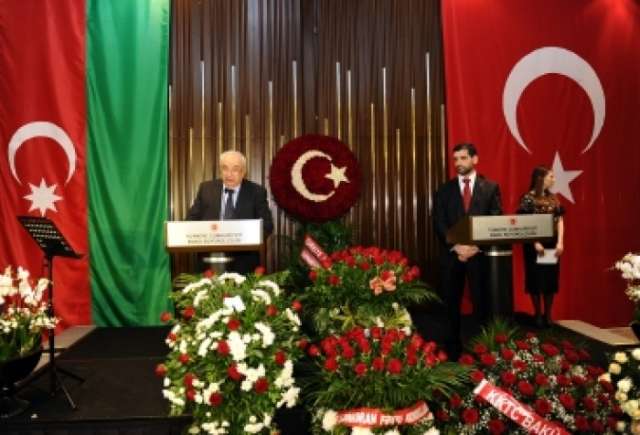 The Turkish Embassy in Azerbaijan has organized an official reception on the occasion of the 94th anniversary of declaration of the Turkish Republic.

After playing the national anthems of both countries, Turkish ambassador Erkan Ozoral told about his country’s struggle for independence and the country`s development during the years of independence.

He noted that Turkey made great strides in political, military, economic, democratic and human rights spheres.
Speaking about the development of relations between Azerbaijan and Turkey, the diplomat said that mutual visits, the signed documents creates opportunity to continue friendly and brotherly relations at the highest level.

Erkan Ozoral emphasized the importance of the Baku-Tbilisi-Kars railway, which was opened on October 30 and expressed his confidence in further development of relations between the two countries.

In turn, Azerbaijani Deputy Prime Minister Abid Sharifov congratulated the Turkish government and nation on behalf of the Azerbaijani government. He praised Turkey`s economic development, hailing relations between the two countries. He said that Turkey has made a great and glorious path of development and cooperation between Azerbaijan and Turkey develops in all spheres.

Abid Sharifov also hailed Turkey's support for Azerbaijan in settlement of the Armenia-Azerbaijan, Nagorno-Karabakh conflict. The Deputy Prime Minister stressed that a number of important documents were signed at the sixth meeting of the Azerbaijan-Turkey High-Level Strategic Cooperation Council held in Baku on October 31, saying that “these documents will give a strong impetus to our further development”.