Venezuela to launch cryptocurrency to combat US 'blockade', Maduro says 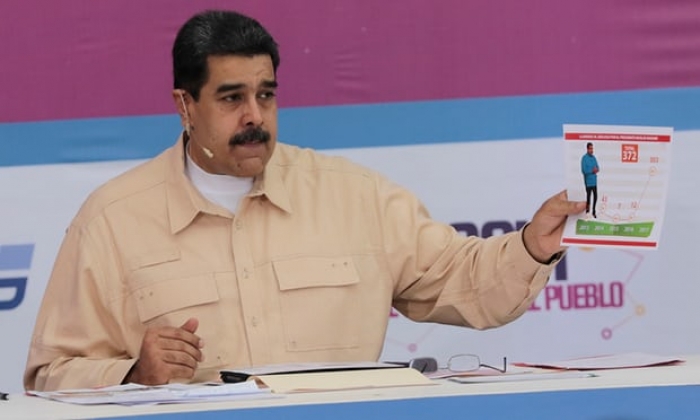 President Nicolas Maduro has said Venezuela would launch a cryptocurrency to combat a US-led financial “blockade,” although he provided few clues about how the economically crippled Opec member would pull off the feat, the Guardian reports.

“Venezuela will create a cryptocurrency ... the ‘petro,’ to advance in issues of monetary sovereignty, to make financial transactions and overcome the financial blockade,” leftist Maduro said during his weekly Sunday televised broadcast.

The digital currency will be backed by Venezuelan reserves of gold, oil, gas, and diamonds, he said during the near five-hour show, which included traditional Christmas songs and dancing.

“The 21st century has arrived!” Maduro added to cheers, without providing specifics about the currency launch.

Opposition leaders scorned the announcement, which they said needed congressional approval, and some cast doubt on whether the digital currency would ever see the light of day in tumultuous Venezuela.

Still, the announcement highlights how US sanctions this year are hurting Venezuela’s ability to move money through international banks. Sources say compliance departments are scrutinising transactions linked to Venezuela, which has slowed some bond payments and complicated certain oil exports.

Maduro’s move away from the US dollar comes after the recent spectacular rise of bitcoin, which has been fuelled by signs that the digital currency is slowly gaining traction in the mainstream investment world.

Cryptocurrencies typically are not backed by any government or central banks. Bitcoin already has a strong following among tech-savvy Venezuelans looking to bypass dysfunctional economic controls to obtain dollars or make internet purchases.

Currency controls and excessive money printing have led to a 57% depreciation of the bolivar against the dollar in the last month alone on the widely used black market. That has dragged down the monthly minimum wage to a mere $4.30.

For the millions of Venezuelans plunged into poverty and struggling to eat three meals a day, Maduro’s announcement is unlikely to bring any immediate relief.

“It’s Maduro being a clown. This has no credibility,” opposition lawmaker and economist Angel Alvarado told Reuters.

“I see no future in this,” added fellow opposition legislator Jose Guerra.

Maduro says he is trying to combat a Washington-backed conspiracy to sabotage his government and end socialism in Latin America. On Sunday he said Venezuela was facing a financial “world war.”