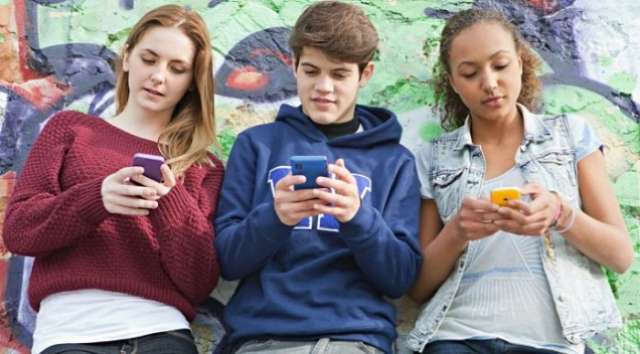 With the average age for a child to get their first phone now just 10, young people are becoming more and more reliant on their smartphones, AzVision.az reports citing the Daily Mail.
And a worrying new study suggests that this dependence on the technology could even be affecting some teens' brains.

The findings reveals that teenagers who are addicted to their smartphones are more likely to suffer from mental disorders, including depression and anxiety.

Researchers from Korea University in Seoul have found an imbalance in the brain chemistry of young people addicted to smartphones and the internet.

In the study, the researchers took brain scans of 19 young people diagnosed with internet or smartphone addiction, and compared them to 19 healthy controls.

Participants also completed tests to measure the severity of their addiction.

Professor Hyung Suk Seo, lead author of the study, said: 'The higher the score, the more severe the addiction.'

The results showed that the addicted teenagers had significantly higher scores in depression, anxiety, insomnia severity and impulsivity than the controls.

The brain scans also showed the levels of gamma aminobutyric acid (GABA), a chemical that slows down brain signals, and glutamate-glutamine (Glx), a chemical that causes brain cells to become more electrically excited, in each participant's brain.

Previous studies have found GABA to be involved in vision and motor control and the regulation of various brain functions, including anxiety.

Results showed that addicted teenagers had much higher GABA levels, and lower Glx levels than the controls.

This suggests that these chemicals are highly linked to smartphone addiction.

CBT starts by breaking down a large problem into smaller, more manageable areas and then works to stop any negative thought processes.

In this study, short CBT sessions conducted on a weekly basis over nine weeks decreased GABA to Glx ratios 'significantly.'

The findings follow a study earlier this week, which found that people are so dependent on their smartphones, and in particular Wi-Fi, that they'll happily break social etiquette to use them. 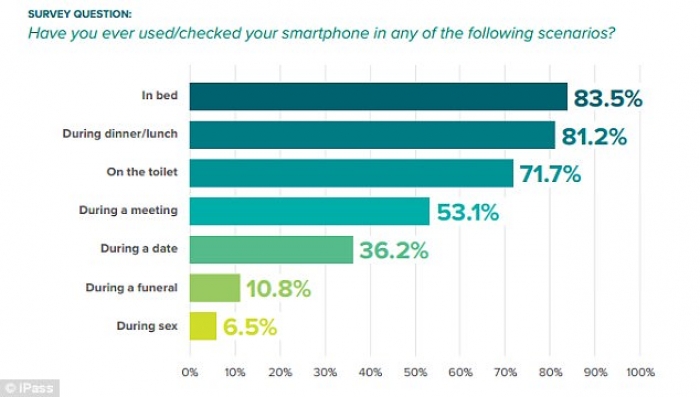 Researchers from mobile connectivity firm, iPass, surveyed 1,700 people in the US and Europe about their connectivity habits, preferences and expectations. The survey found 83.5 per cent check their phones in bed and 6.5 per cent during sex. Shown here are the results

Researchers from mobile connectivity firm, iPass, surveyed more than 1,700 people in the US and Europe about their connectivity habits, preferences and expectations.

The survey revealed some of the most inappropriate situations in which people have felt the need to check their phone – during sex (seven per cent), on the toilet (72 per cent) and even during a funeral (11 per cent).

Nearly two thirds of people said they felt anxious when not connected to the Wi-Fi, with many saying they'd give up a range of items and activities in exchange for a connection.