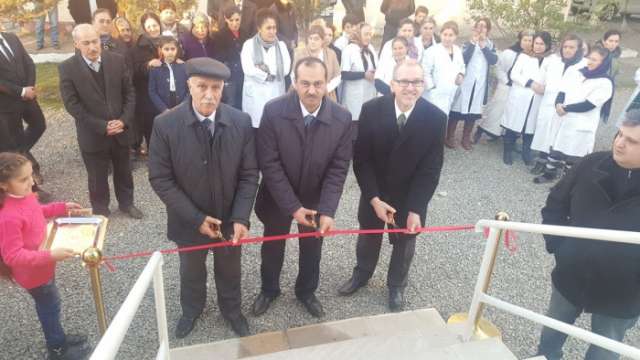 On December 11, villages in the Zardab and Aghjabadi districts celebrated the completion of medical facility and livestock management projects made possible by the joint efforts of the United States and Azerbaijan.

The United States, via USAID, and the Government of Azerbaijan co-financed the projects, which were managed by the East-West Management Institute. The U.S. Embassy, the U.S. Agency for International Development (USAID), the Ministry of Economy, local Executive Committees, and municipal government representatives attended the events.

Residents in the Alibayli village of Zardab district and in the Kahrizli and Hindarkh villages of Aghjabadi district built medical facilities able to meet each community’s healthcare needs, with technical support from the East-West management Institute. These new facilities, which include an examination room and a waiting room, will improve the day-to-day access to healthcare for more than 13,600 people in these three villages.

In the Huseynkhanli village of Zardab district, residents built a feed-grinding and seed-cleaning facility that increases the local availability of affordable animal feed. The new facility benefits more than 450 people in Huseynkhanli village whose livelihoods depend on cattle-breeding and agriculture.

The United States and Azerbaijan have completed 112 community projects in 99 Azerbaijani communities. These projects have benefitted nearly 200,000 people. The projects are made possible by USAID’s Socio-Economic Development Activity (SEDA) program. Implemented by the East-West Management Institute, SEDA promotes cooperation between citizens, civil society organizations, and the government to advance socio-economic development and improve the quality of life in rural areas.