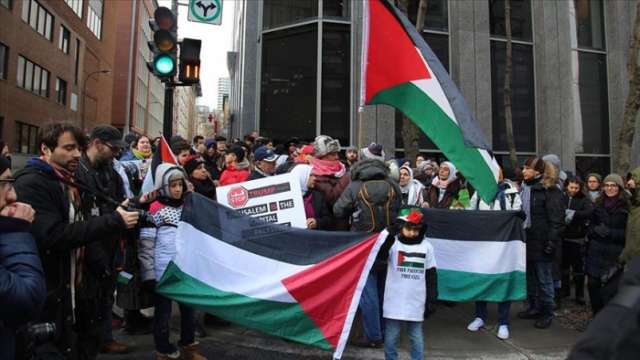 The march, organized by Jamat-e-Islami (JI) party, saw the participation of a large number of women and children.

"Jerusalem belongs to Palestine" and "Down with USA and Israel" were some of the slogans the participants raised.

"The march is a message to the United States and Israel that Jerusalem can never be capital of the Zionist state till the last Muslim survives,” said party chief Siraj-ul-Haq in his address.

“ We salute the brave Palestinian nation, which has sacrificed its children, but has never accepted the Israeli occupation," he said.

On Dec. 6, Trump announced his decision to recognize Jerusalem as Israel’s capital, sparking angry demonstrations in many Muslim countries and worldwide condemnation.

Rebuffing the move, an extraordinary Organization of Islamic Cooperation (OIC) summit in Istanbul this week declared East Jerusalem to be Palestine’s capital.

Jerusalem remains at the heart of the Israel-Palestine conflict, with Palestinians hoping that East Jerusalem - now occupied by Israel -- might eventually serve as the capital of a Palestinian state.