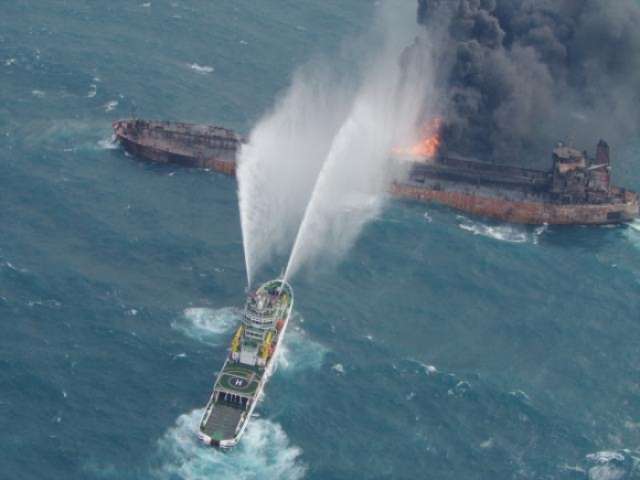 A Chinese salvage team recovered two bodies on Saturday from a stricken Iranian oil tanker, that was still blazing a week after it caught fire and was left adrift following a collision in the East China Sea, state news agency Xinhua reported.
The four members of the salvage team wore respirators to board the “Sanchi”, where they found the two bodies on the deck.

They tried to get to the living quarters but were driven back by temperatures on the burning ship of around 89 Celsius (192 Fahrenheit), Xinhua said.

Chinese Foreign Minister Wang Yi told Iranian counterpart Mohammad Javad Zarif by telephone that “as long as there is 1 percent of hope, China will continue to make 100 percent effort” in the rescue effort, according to a report on the ministry website.

The body of a mariner suspected to be from the ship was recovered on Monday and sent to Shanghai for identification. The rest of the crew, which included 30 Iranians and two Bangladeshis, remains missing.

The salvage team recovered the voyage data recorder, or “black box” from the bridge, before leaving the vessel less than half an hour after boarding because the wind had shifted and “thick toxic smoke” had complicated the operation, Xinhua said.