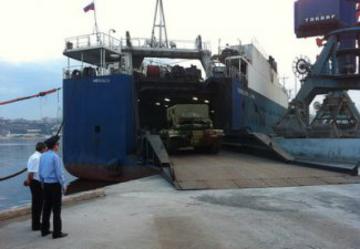 Photos featuring transportation and unloading of Russian tanks and other vehicles in a port, which are claimed to be delivered for the Azerbaijani army, have appeared on internet.
Two sources in the Russian defense industry have confirmed it to Vedomosti newspaper that the photos are original and reflect the process of supply of military equipment under a package of contracts signed with Azerbaijan in 2011-2012.

T-90S acquired by Azerbaijan have modern thermal imagers, guided missile systems and complex of optical-electronic suppression of high-precision weapons, and air conditioning. This will significantly improve the living conditions of crews in hot climates.

The total cost of contracted systems together with ammunition may cost at least $700m and, perhaps, and about $1bn, said a source in the Russian Defense Ministry.

Military sources told earlier that part of the vehicles purchased from Russia, especially T-90S tanks, may be demonstrated in a parade to be held on Armed Forces Day of Azerbaijan on 26 June.

In its turn, Defense Ministry of Azerbaijan did not confirm the reports on amount of the vehicles purchased and timing of its delivery.