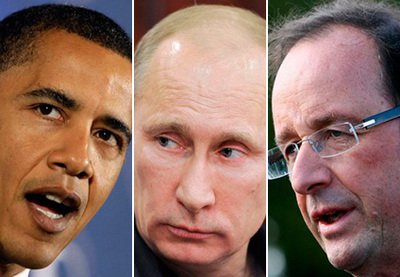 The statement reads: “We, the Presidents of the OSCE Minsk Group Co-Chair countries – France, the Russian Federation, and the United States of America – remain committed to helping the parties to the Nagorno-Karabakh conflict reach a lasting and peaceful settlement. We express our deep regret that, rather than trying to find a solution based upon mutual interests, the parties have continued to seek one-sided advantage in the negotiation process.

We continue to firmly believe that the elements outlined in the statements of our countries over the last four years must be the foundation of any fair and lasting settlement to the Nagorno-Karabakh conflict. These elements should be seen as an integrated whole, as any attempt to select some elements over others would make it impossible to achieve a balanced solution.

We reiterate that only a negotiated settlement can lead to peace, stability, and reconciliation, opening opportunities for regional development and cooperation. The use of military force that has already created the current situation of confrontation and instability will not resolve the conflict. A renewal of hostilities would be disastrous for the population of the region, resulting in loss of life, more destruction, additional refugees, and enormous financial costs. We strongly urge the leaders of all the sides to recommit to the Helsinki principles, particularly those relating to the non-use of force or the threat of force, territorial integrity, and equal rights and self-determination of peoples. We also appeal to them to refrain from any actions or rhetoric that could raise tension in the region and lead to escalation of the conflict. The leaders should prepare their people for peace, not war.

Our countries stand ready to assist the sides, but the responsibility for putting an end to the Nagorno-Karabakh conflict remains with them. We strongly believe that further delay in reaching a balanced agreement on the framework for a comprehensive peace is unacceptable, and urge the leaders of Azerbaijan and Armenia to focus with renewed energy on the issues that remain unresolved.”