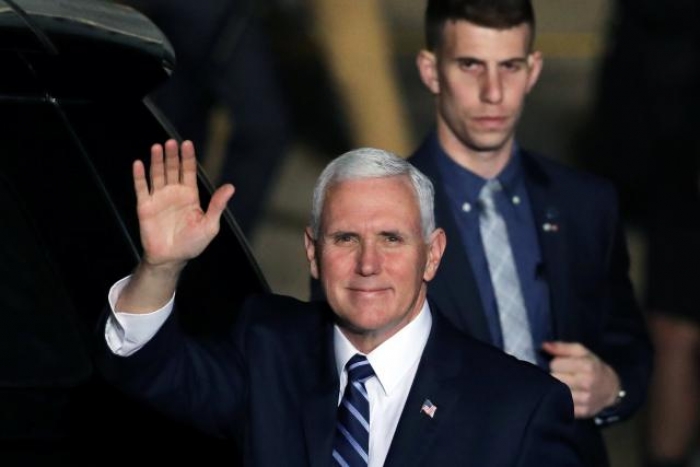 U.S. Vice President Mike Pence began a visit to Israel on Sunday after being praised as a “great friend” by Prime Minister Benjamin Netanyahu and shunned by the Palestinians over U.S. recognition of Jerusalem as Israel’s capital.
It is the highest-level U.S. visit to the region since President Donald Trump made his declaration on Dec. 6 and promised to begin the process of moving the American embassy to the city, whose status is at the heart of the Israeli-Palestinian conflict.

With the Palestinians boycotting Pence, the visit provides little obvious opportunity to build bridges toward peace.

But it gave Pence, a conservative Christian, and Netanyahu, a right-winger who has hailed U.S. evangelicals for their support of Israel, an opportunity to shine a spotlight on the visit and their own warm relationship for a community that serves as a power base for Trump and his vice president.

Before arriving in Israel, Pence held meetings with the leaders of Egypt and Jordan and U.S. officials traveling with him said that he had sought to encourage them to pressure the Palestinians to return to peace talks.

Palestinian President Mahmoud Abbas, calling Trump’s declaration a ”slap in the face’, has rejected Washington as an honest broker in any future talks with Israel. Abbas left for an overseas visit before Pence arrived.

Pence, who flew into Tel Aviv’s Ben-Gurion Airport from Jordan on a U.S. military plane after visiting U.S. troops on the Syrian border, was met by Israel’s tourism minister, Yariv Levin. Pence, who traveled to the Middle East despite a U.S. government shutdown, made no statement on arrival in Israel.

Netanyahu, addressing his cabinet earlier on Sunday, described Pence as a “great friend of the State of Israel” and said they would discuss U.S. efforts “to halt Iran’s aggression, the Iranian nuclear program, and ways to advance peace and security in the region.”

“Anyone who truly wants to fulfill those goals knows there is no substitute to the United States’ leadership,” said Netanyahu, who is due to hold talks with Pence on Monday.

Trump’s shift on Jerusalem overturned decades of U.S. policy that its status should be decided in Israeli-Palestinian negotiations. His declaration drew universal condemnation from Arab leaders and widespread criticism elsewhere.

Israel’s government regards Jerusalem as the eternal and indivisible capital of the country, although that is not recognized internationally. Palestinians feel equally strongly, saying that East Jerusalem must be the capital of a future Palestinian state.

In comments delivered in Egypt, his first stop on the Middle East visit, Pence said Washington would support a two-state solution for Israelis and Palestinians if the two sides agreed to it.

Visiting Jordan on Sunday before flying to Israel, Pence told its monarch, King Abdullah, that Washington was committed to preserving the status quo of holy sites in Jerusalem, a city sacred to Jews, Muslims and Christians.

Pointing to “challenging circumstances”, the king said he hoped Washington would “reach out and find the right way to move forward”. Pence told reporters he “agreed to disagree” with King Abdullah on the impact of Trump’s move.

U.S.-sponsored peace talks collapsed in 2014 and Trump has pledged to pursue a “deal of the century” between Israel and the Palestinians, who are seeking a state in the occupied West Bank and the Gaza Strip with East Jerusalem as its capital.

Jason Greenblatt, Trump’s special envoy to the peace process, remained in Israel for Pence’s visit after arriving on Wednesday.

After meeting Netanyahu, Pence will address the Israeli parliament, whose Arab members said they would boycott the event. On the second day of his two-day visit on Tuesday, he will attend Judaism’s Western Wall in Jerusalem and will lay a wreath at the Yad Vashem Holocaust remembrance center in the city.

Pence is thought to have pushed hard for both Jerusalem’s recognition as Israel’s capital and relocation of the U.S. embassy to the city. It is a decision that was popular with many conservative and evangelical Christians who voted for Trump and Pence.

As Pence arrived, a small group of Palestinian protesters outside Bethlehem’s Church of the Nativity, the traditional birthplace of Jesus Christ, burned a poster of the vice president which also bore the words: “Pence go home.”