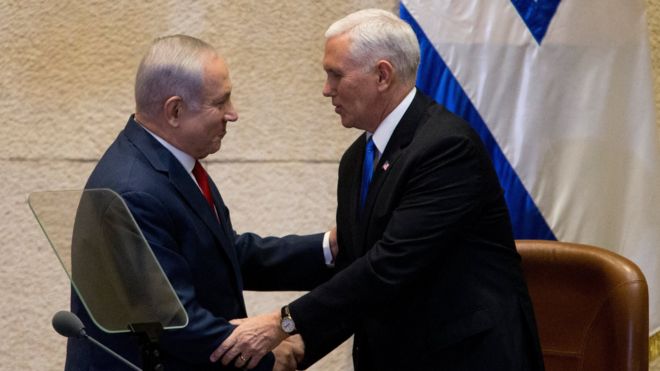 The US embassy will move from Tel Aviv to Jerusalem before the end of 2019, Vice-President Mike Pence has said.

The date is earlier than some had expected when President Donald Trump declared last month that Jerusalem was Israel's capital and ordered the start of preparations for the embassy move.

Mr Pence made the announcement in a speech to the Israeli parliament.

He was briefly interrupted by a group of Arab MPs who protested against Mr Trump's controversial declaration.

The status of Jerusalem goes to the heart of the Israeli-Palestinian conflict.Israel regards Jerusalem as its "eternal and undivided" capital, while the Palestinians claim East Jerusalem - occupied by Israel in the 1967 Middle East war - as the capital of a future state.

Israeli sovereignty over Jerusalem has never been recognised internationally, and according to the 1993 Israel-Palestinian peace accords, the final status of Jerusalem is meant to be discussed in the latter stages of peace talks.

Since 1967, Israel has built a dozen settlements, home to about 200,000 Jews, in East Jerusalem. These are considered illegal under international law, although Israel disputes this.