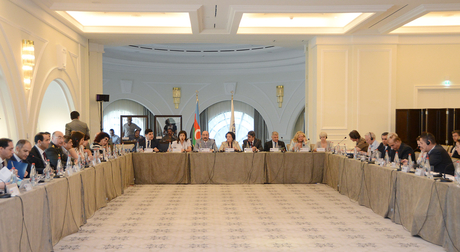 Azerbaijan`s capital Baku hosts the 11th International Conference of Ombudsmen. The conference is devoted to Human Rights Day, and the 65th anniversary of the United Nations Universal Declaration of Human Rights.

The conference, titled “The Key Role of the New Mechanisms of Sustainable Development Strategies in the Protection and Promotion of Human Rights”, is being organized with the support of the United Nations Educational, Scientific and Cultural Organization (UNESCO).

Opening the event, Human Rights Commissioner (Ombudsman) of Azerbaijan Elmira Suleymanova said that the conference is attended by more than 20 ombudsmen and their representatives, international experts on human rights, representatives of influential international organizations and well-known lawyers and scholars from Canada, Turkey, the Netherlands, Bulgaria, Pakistan, Russia, Moldova, Georgia, Estonia and other countries.

Speaking at the event, Azerbaijani Deputy Prime Minister and chairman of the State Committee for Refugees and IDPs, Ali Hasanov, said it would be better if international organizations dealing with human rights addressed the issue of implementing the decisions they passed and then would teach Azerbaijan lessons on human rights.

Each time, when representatives of the UN Commission on Human Rights and the Commissioner for Human Rights of the Council of Europe visit Azerbaijan they make comments that the trampled rights of citizens are not protected properly in the country, Hasanov said.

He emphasized that 20 percent of Azerbaijani territory is under Armenian occupation. Authorized international organizations have adopted various resolutions on the issue, however, the resolutions are not being enforced.

According to Hasanov, it is necessary to change the attitude toward those who are failing to implement international resolutions.

Hasanov said the number of conflicts in the world is increasing year on year. Whereas 20 years ago there were 20 million refugees and IDPs, currently their number has reached 36 million, he said and added that an international convention should be passed for the protection of their rights.

He added that Azerbaijan is the most tolerant country in the world, therefore, the attention and interest in the country has increased.

Furthermore, First Secretary of the National Commission of Azerbaijan for UNESCO Gunay Efendiyeva and UN Resident Coordinator/UNDP Resident Representative in Azerbaijan Antonius Broek made speeches at the international conference.