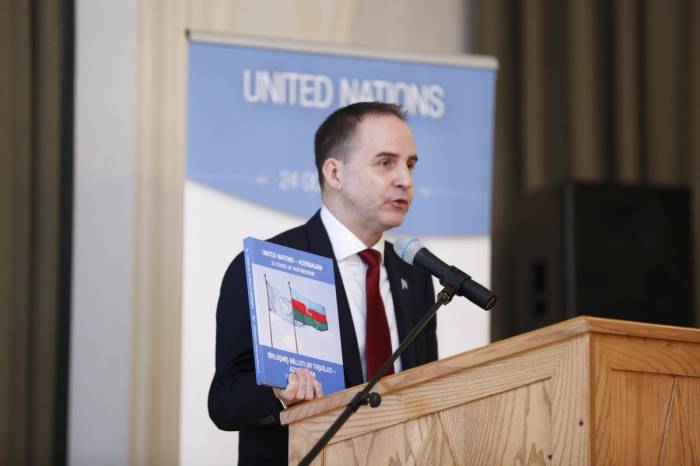 UNICEF has repeatedly stated that civilians, especially children and women, should not be harmed in any conflict, including the Nagorno-Karabakh conflict, Head of the UNICEF Office in Azerbaijan Edward Carwardine said in his interview to APA.

Answering a question regarding UNICEF's silence towards the death of 2-year-old Zahra as a consequence of a ceasefire violation by Armenia in July of last year, Carwardine said that it is in the hands of the conflict sides to avoid people—especially children-being killed in ceasefire violations.

"The killing of women and children as well as the targeting of educational institutions, hospitals and playgrounds where children are more is unacceptable. The parties should protect children from violence. The parties involved in the conflict should undertake to prevent such incidents because they are the ones who have created the conditions for such a conflict and its consequences," said Carwardine.

The diplomat said that the UN Secretary-General had repeatedly called on the parties to the Nagorno-Karabakh conflict to work towards a peaceful solution.

"Therefore, I think that the conflicting parties should be more active in preventing such cases. There is a long, ongoing process for the peaceful settlement of the conflict. I think that the parties should make full use of this process to create conditions for peace by adhering to the adopted resolutions. UNICEF's position on this issue is very clear. I would like to reiterate that no child should suffer from conflict or become a victim of it - this is our official position and we will continue to stand on it,” he added.

On July 4, 2017, at about 20:40 (UTC +4), the Armenian armed forces, using 82-mm and 120-mm mortars and grenade launchers, shelled Azerbaijani positions and territories populated by the civilians, namely the Alkhanli village of the country’s Fuzuli district. As a result of this provocation, the residents of the village Sahiba Guliyeva, 50, and Zahra Guliyeva, 2, were killed. Sarvinaz Guliyeva, 52, who got wounded, was taken to a hospital and was operated on.