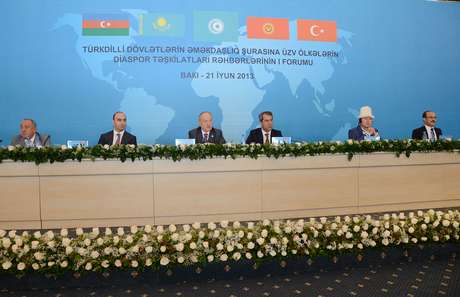 The 1st Forum of Heads of Diaspora Organizations of Member Countries of the Cooperation Council of Turkic-Speaking States has been held in Baku.
The event brought together representatives of diaspora organizations, as well as state and government officials, NGOs, scientific and cultural institutions of Azerbaijan, Kazakhstan, Kyrgyzstan and Turkey.

The forum started with a presentation of a documentary on the activity of the Turkic-speaking countries and Azerbaijani diaspora.

Speaking to the event, Secretary General of the Cooperation Council of Turkic Speaking States Halil Akinci thanked the Azerbaijani government for excellent organization of the forum.

Addressing the event, head of the Azerbaijan`s State Committee for Work with Diaspora Nazim Ibrahimov wished successes the Forum.

He noted today diaspora organizations of the Turkic-speaking countries have millions of members in the world, adding the main duty is strengthening unity and solidarity among Turkic peoples.

Commenting on the efforts made by Turkic-speaking countries towards the political and cultural unity, the Committee chairman said: “Today, diaspora organizations of Turkic-speaking peoples have millions of members in various countries of the world. This is a sufficiently serious power and gives us an opportunity to join our force in order to interests of our people”.

Chief of the Department for Political Analysis and Information of the Presidential Administration of Azerbaijan Elnur Aslanov read out President Ilham Aliyev`s congratulatory letter to the Forum participants.

The attendees have also heard congratulatory letters from presidents of Turkey, Kazakhstan and Kyrgyzstan.

Addressing the forum, first deputy chair of the Board of directors of the World Association of Kazakhs Talgat Mamashov stressed the importance of the 1st Forum of Heads of Diaspora Organizations of Member Countries of the Cooperation Council of Turkic-Speaking States, adding the forum will give an opportunity to Turkic-speaking countries to expand relations.

Labor, Migration and Youth Minister of Kyrgyzstan Aliyasbek Alymkulov thanked Azerbaijani government for the organization of the Forum. He stressed the importance of unity among the Turkic-speaking peoples.

Head of the Presidency for Turks Abroad and Related Communities Kemal Yurtnac said the forum was very important in terms of providing unity and protecting interest of Turkic-speaking people and “delivering the rights voice to the world”.

Secretary General of the International Organization of Turkic Culture (TURKSOY) Dusen Kaseinov, in turn, underlined the importance of the 1st Forum of Heads of Diaspora Organizations of Member Countries of the Cooperation Council of Turkic-Speaking States.

He informed the attendees on work towards bringing together diaspora organizations of Turkic-speaking countries.

Addressing the event, Secretary General of the Parliamentary Assembly of Turkic Speaking Countries (TURKPA) Ramil Hasanov spoke of the work done towards strengthening of diaspora organizations. He expressed confidence that the Baku Forum will play a significant role in speeding up the process of bringing together Turkic-speaking peoples.

The forum also adopted a Baku Declaration and address to Presidents Ilham Aliyev of Azerbaijan, Nursultan Nazarbayev of Kazakhstan, Almazbek Atambayev of Kyrgyzstan and Abdullah Gul of Turkey.

The Declaration stresses the importance of strengthening unity between Turkic-speaking peoples in terms of providing peace and security in the region. The document suggests coordination of activity of diaspora organizations of member countries of the Cooperation Council of Turkic-Speaking States within nine directions. The Declaration says the Forum attendees stress the importance of support of the process for organization of diasporas of the Turkic-speaking peoples, creation of regional centers aimed at coordination of activity of the diaspora organizations, communities and institutions and ensuring full information on history, culture and modern life of the Turkic world to the world community.

In the address to presidents of the Turkic-speaking countries, the Forum attendees assure the heads of states that they will do their best to ensure unity between the Turkic-speaking peoples, protection of interests and to deliver their right voice to the world.