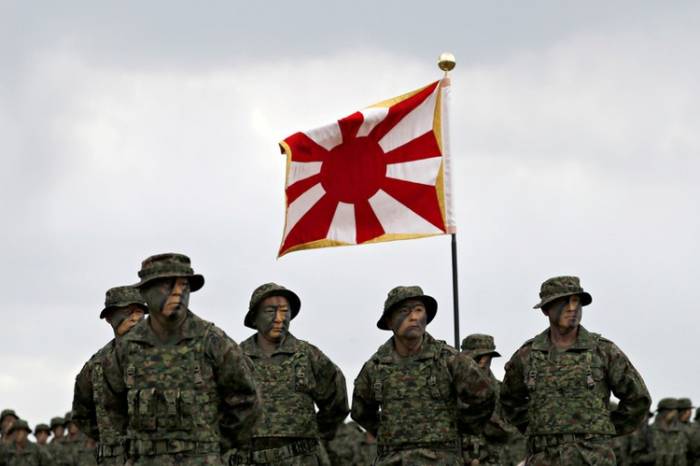 Japan on Saturday activated its first marine unit since World War Two trained to counter invaders occupying Japanese islands along the edge of the East China Sea that Tokyo fears are vulnerable to attack by China.

In a ceremony held at a military base near Sasebo on the southwest island of Kyushu, about 1,500 members of the Amphibious Rapid Deployment Brigade (ARDB) wearing camouflage lined up outside amid cold, windy weather.

“Given the increasingly difficult defense and security situation surrounding Japan, defense of our islands has become a critical mandate,” Tomohiro Yamamoto, vice defense minister, said in a speech.

The formation of the Japanese marine brigade is controversial because amphibious units can project military force and could, critics warn, be used to threaten Japan’s neighbors. In its post World War Two constitution Japan renounced the right to wage war.

The brigade is the latest component of a growing marine force that includes helicopter carriers, amphibious ships, Osprey tilt-rotor troop carriers and amphibious assault vehicles, meant to deter China as it pushes for easier access to the Western Pacific.

China, which dominates the South China Sea, is outpacing Japan in defense spending. In 2018, Beijing which claims a group of uninhabited islets in the East China Sea controlled by Tokyo, will spend 1.11 trillion yuan ($176.56 billion) on its armed forces, more than three times as much as Japan.

The activation of the 2,100 strong ARDB takes Japan a step closer to creating a force similar to a U.S. Marine Expeditionary Unit (MEU) able to plan and execute operations at sea far from its home base.

“They’ve already demonstrated the ability to put together an ad hoc MEU. But to have a solid, standing MEU capability requires concerted effort,” Grant Newsham, a research fellow at the Japan Forum for Strategic Studies.

“If Japan put its mind to it, within a year or year and a half it could have a reasonable capability.”

Japanese military planners are already mulling some of those additions. Its Air Self Defense Force (ASDF) wants to acquire F-35Bs to operate from its Izumo and Ise helicopter carriers, or from islands along the East China Sea, sources have told Reuters.

The United States last month deployed its F-35Bs for their first at-sea operations aboard the USS Wasp amphibious assault ship, which is based in Sasebo. The Kyushu port is also home to Japan’s Ise and close to the ARDB’s base.

Separately the GSDF may acquire small amphibious ships up to a 100 meters (328.08 ft) long to transport troops and equipment between islands and from ship to shore, two sources familiar with the discussion said. Japanese ground forces have not operated their own ships since World War Two.

“The idea is to bring forces and gear on large ships to the main Okinawa island and then disperse them to other islands on smaller vessels,” said one of the sources, who asked not to be identified because they are not authorized to talk to the media.