How to eat: lasagne 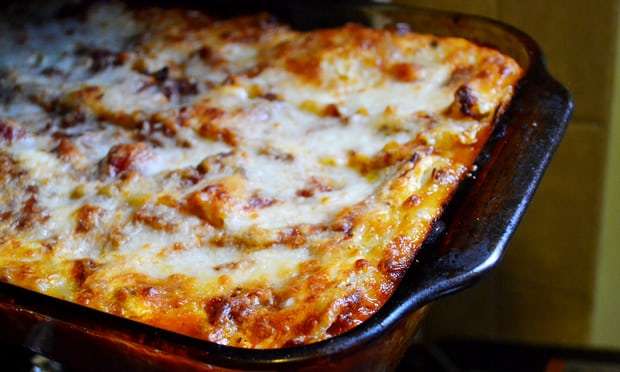 How to Eat has a lasagne in the oven. But will you be eating it with salad, garlic bread, chips – or even boiled potatoes?

It originated in ancient Rome (as a nauseating miscellany of thrush, tripe and raisin wine), and the al forno/alla bolognese form of the dish most common in northern Europe was perfected in Emilia-Romagna. But nonetheless, in the UK, we have a deep love for lasagne. We have made this month’s How to Eat subject our own.

An early version of “loseyns” features in the 14th-century English cookbook, The Forme of Cury, while, in 2016, the Good Housekeeping Institute found that, 700 years later, it was still Britain’s second most popular ready-meal. That is some staying power, and may explain why lasagne has become an unexpected bit player in so many political bridge-building exercises. Left or right, it seems, leave or remain, we all adore lasagne.

Even if, as How to Eat [HTE] – the series examining how to best eat Britain’s favourite dishes – will now explain, people are doing it all wrong. Probably.

Given that, even within Italy, lasagne (essentially, a catch-all name for savoury ingredients layered between pasta sheets) can range from a Ligurian pesto version to the Neapolitan carnevale of meatballs and boiled eggs, only a fool would attempt to disbar any of the potential iterations of lasagne. And HTE is just that fool. Let’s face it, not all lasagnes were created equal, and we should be upfront about that. HTE will concentrate on the lasagne alla bolognese because:

1) HTE’s mind is closed to the open lasagne, that impractical, unsatisfying confusion of huge pasta folds unsuited to conveying the accompanying oily sauces and, often, random ingredients. Every open lasagne could immediately be improved by being arranged in a stack formation, doused with béchamel and baked in the oven.

2) If you are looking for a metaphor for the self-defeating insularity of Brexit, look no further than Theresa May serving chicken lasagne (with boiled potatoes!) at Chequers. There is some ancient historical precedent for using chicken in lasagne, but, in 21st-century Britain, there is barely a dish in existence that would benefit from having beef replaced by this paltry meat. Alhough, in the Brexit wastelands of the 2040s, we may look back on the halycon days of chicken lasagne with fondness. It could be all turkey mince by then.

3) Like a good U2 song or a comfortable journey on a commuter train, eating an impressive vegetable lasagne is possible. But it is an experience so vanishingly rare as to be statistically insignificant. For every restaurant doing something exquisite with jerusalem artichokes or wild mushrooms, there are 10,000 lumpen veggie lasagnes layered with an overly sweet, overly acidic ratatouille-like slurry of “Mediterranean” vegetables that have all the sunshine flavour of an abandoned graveyard in Telford. If anyone ever talks to you about putting lentils in a lasagne, just run. And hide. You should be out of earshot before they complete the sentence. 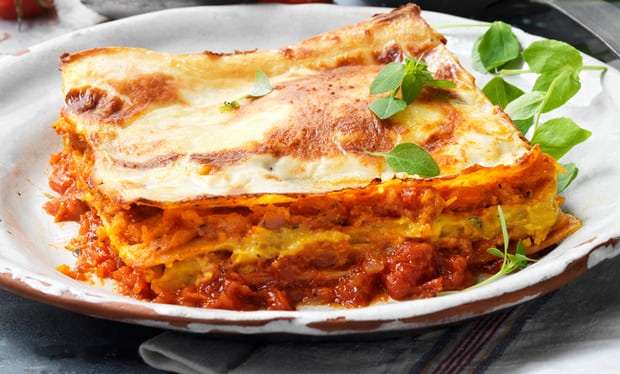 4) Seafood lasagne, see vegetable lasagne – only with the added threat of tuna and poached salmon in the mix.

5) Some people suggest serving spinach with lasagne, in lasagne or, fiendishly, worked into the pasta sheets which, at first, you might imagine someone has amusingly augmented with green food colouring. Ignore those people. Say no to the spinach-lasagne crossover. Say no to lasagne verdi.

A note on lasagne alla bolognese

HTE defers to Felicity Cloake on the minutiae of how to cook lasagne, but it must make the case for dried egg pasta sheets as the building material of choice. There are experts, as diverse as Hugh Fearnley-Whittingstall and Giorgio Locatelli, who insist on fresh pasta. But crucially the, respectively, River Café alumni and Michelin-starred chef can probably create pasta that, despite being thinner than a Tory promise on the NHS still retains its bite and structure. Most of us are not nearly that skilled. Instead, we produce, not gossamer-thin pasta sheets, but overly thick, galumphing great folios of flour and water that bring a dead, lead weight to a lasagne. A lot of commercial fresh pasta is similarly flawed. 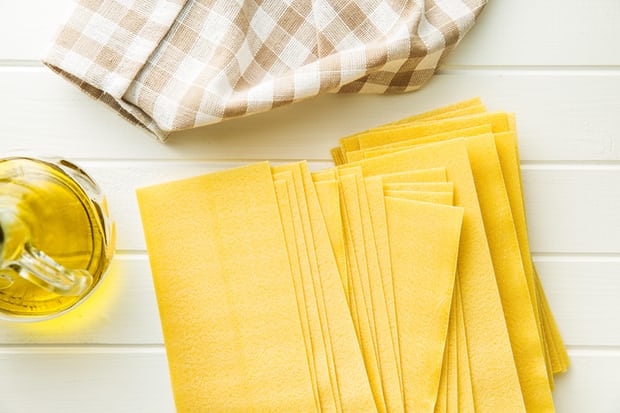 Dried egg pasta is the way to go, particularly if you are a connoisseur (the kind of connoisseur who would fight their family members to the death for the prized corner portion of a homemade lasagne) of the crispy, slightly scorched curls of pasta at a lasagne’s exposed edges. Think of it as lasagne’s crackling. Note: under no circumstances should that pasta be replaced with grilled slices of aubergine.

In terms of the filling, while it is tempting to say there is no such thing as too much cheese, in lasagne’s case that is incorrect. Layered with mozzarella or piled high with cheddar, it can quickly become a cloying, artery-clogging gloopfest. A circumspect top layer of intense parmesan (or grana padano, for the cost-savvy), perhaps mixed with a few breadcrumbs, is really all that lasagne needs.

It does not need any. No prissy basil leaves. No scattered flat-leaf parsley (the surest way to ruin that cheesy top layer). No crossed chives, the tell-tale mark left by the unimaginative chef.

In a wide, shallow bowl with a broad rim (useful for balancing bread on, see below), which means the lasagne will sit squat in its own sauce, rather than those juices running all over the plate and going cold too quickly.

Does it need any? Arguably not; a well-made lasagne is really a self-contained meal. However, if not essential, certain sides are more preferable than others.

In many quarters, there seems to be a carte blanche carbs-on-carbs ban when it comes to lasagne. And as Theresa May’s boiled potatoes prove, such combinations can be horrific. However, there is a whiff of snobbery to all this too, a sense that carbs are now somehow déclassé. 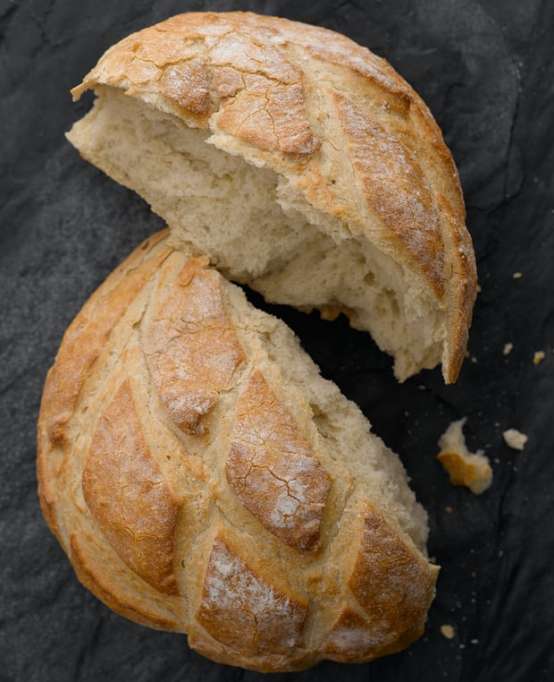 Yet, unsophisticated as serving thickly buttered crusty bread with lasagne may be, it is delicious. How could it not be? As you mop up beefy gravy, tomato, béchamel and cheese from around your bowl, you are, essentially, creating several fleeting bursts of the same flavours you love in everything from a Sunday roast to pizza. HTE may draw the line at the “lasandwich” – it is too much of a potentially good thing – but, a little bread, like a few chips (it’s cheesy chips … it’s chips’n’gravy; what’s not to love?), is a glorious thing. Note: avoid stiff garlic bread, it is neither manoeuvrable nor absorbent enough.

Lasagne is more commonly served with a salad, which is far worthier and far less successful. True, if your lasagne is exceptionally rich, greasy and filling, a side-salad can make a pleasant palate-cleanser. But it must be served separately. No one wants to see those salad leaves wilt into a bowl that is swimming in hot gravy, béchamel and cheese. 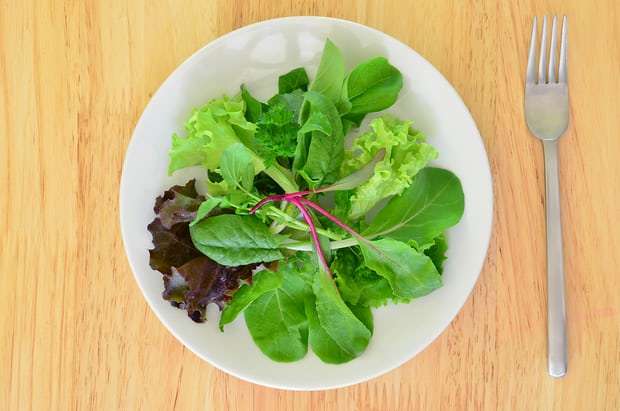 A green salad is a worthy side to a lasagne. Photograph: fotogal/Getty Images/iStockphoto

For such a salad, HTE would recommend a mix of peppery watercress, sweet red oak leaf etc, simply dressed with oil and salt. No rocket (increasingly woody and hedge-like) and no overly bitter combinations of frisee or radicchio, either. They would ruin your next mouthful of lasagne. As will, for different reasons, creamy chopped, mayo- or ranch-dressed salads, or any salads that involve, say, tomato or beetroots. Who wants to eat cold vegetables (please do not write in, HTE is fully aware that tomatoes are not vegetables), halfway through a hot meal?

If, for medical reasons, your body is crying out for vitamins, then peas or broccoli are not the worst vegetable options. They have a natural affinity with cheese and meaty gravy and, texturally, fold unobtrusively into the wider meal. Beyond that, on an arc from kale (too assertive), via grilled courgettes (likewise, a potentially mineral clanger) to roasted peppers (unholy slime at the best of times), the vegetables that do not work with lasagne are many and varied. This is a dish best left to stand alone.

One Guardian colleague (“I’m an animal”) confesses to loving reheated lasagne with loads of ketchup. HTE has checked and, unfortunately, this is not a sackable offence.

Eating cold lasagne – yes, shrivelled, set, solidified lasagne – is in the same bizarre ballpark. As 10cc once sang: “Life is a minestrone… death is a cold lasagne.”

Lasagne is surely an evening meal, too filling for lunch (when you can ill afford the mid-afternoon carb crash), but perfect for when you want to flop down on the sofa in front of the TV, put your brain in neutral (or watch an improving documentary about Renaissance fresco restoration on BBC4) and let yourself melt into the warm, comforting arms of a bowl of lasagne as big as your head.