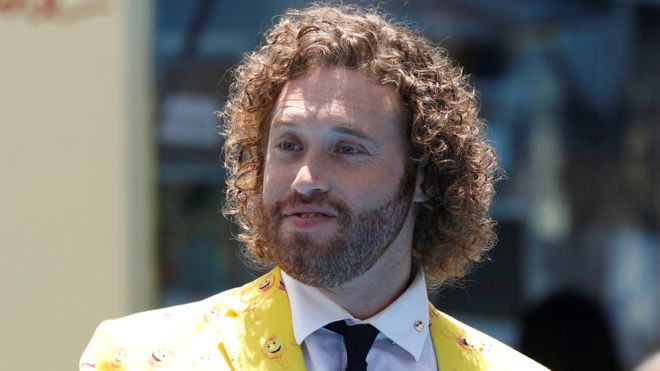 US actor and comedian TJ Miller has been charged for intentionally reporting a fake bomb threat while travelling on a train, officials say.

Mr Miller, who allegedly called police from the train to report a female passenger with "a bomb in her bag", was arrested in New York on Monday.

The incident, which happened on 18 March, led to the Amtrak vehicle being searched without a device being found.

Mr Miller faces up to five years in prison if found guilty of the charge.

The actor, who is best known for his role as Erlich Bachman in the US comedy series Silicon Valley, has featured in a number of Hollywood films such as Deadpool and Cloverfield.

According to a statement released on Tuesday by the US Attorney for the District of Connecticut, the 36-year-old allegedly initially told officers that a woman with "brown hair and a scarf" was carrying a device on a train travelling from Washington DC to New York City.

When an investigator called him back, he said the woman had "red hair and a red scarf" and was clutching a black suitcase.

He said, according to the statement, that the passenger "kept checking her bag without taking anything out" and seemed to want to alight the train without it.

"I am worried for everyone on that train, someone has to check that lady out," he is quoted as saying.

The officer on the phone reportedly detected slurring in Mr Miller's voice and asked him if he had consumed any alcohol, to which he replied: "One glass of red wine."

The Amtrak train was later inspected further on at a stop in Connecticut and was found not to contain any explosive devices or materials.

During the stop, Amtrak officers interviewed a member of staff from the first class area where Mr Miller had earlier been sitting.

The member of staff said that Mr Miller appeared intoxicated upon boarding in Washington, that he had consumed multiple drinks on the train, and that he had been removed in New York owing to his state of intoxication.

Amtrak officers were also told that Mr Miller had been involved in "hostile exchanges" with a woman in a different row in the same carriage.

Mr Miller, who has been released on bail, has not yet commented on the charges.

Officials said that the charges reported on Tuesday were allegations and not evidence of guilt.