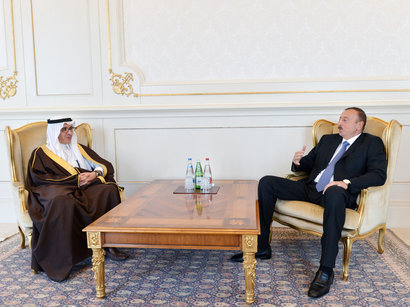 The ambassador passed along a ceremonial guard of honor.

He presented his credentials to the Head of State.

In his conversation with the ambassador, President Ilham Aliyev praised bilateral relationship between the two countries and peoples. The Head of State said Saudi Arabia was one of friends and allies of Azerbaijan.

The ambassador extended greetings of King Abdullah bin Abdul Aziz Al-Saud to President Ilham Aliyev. He said Saudi Arabia was interested in expansion of relationship with Azerbaijan. The diplomat praised political relations between Azerbaijan and Saudi Arabia. The ambassador said great opportunities exist to develop bilateral economic cooperation, adding he would spare no efforts in this direction.

The Head of State thanked for the greetings of Abdullah bin Abdul Aziz Al-Saud and asked the diplomat to convey his greetings to the Saudi King.