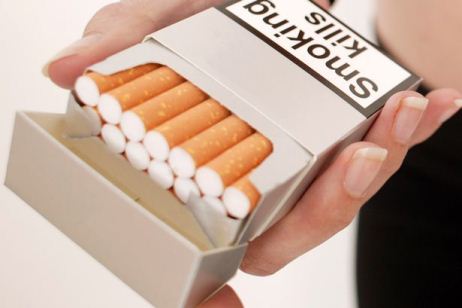 Cigarette packets that TALK could soon join the fight to browbeat smokers into quitting their unhealthy habit.

Researchers were inspired by tobacco companies who have been making packaging more attractive for consumers.

They wanted to see if similar tactics could work against the companies and encourage people to give up the habit, rather than keep buying.

Stirling University have been testing the devices on young women, and are about to open this up to include older age groups and men.

One offered smokers a phone number for advice on quitting smoking and another warned that smoking reduces fertility.

The packets use similar technology to singing birthday cards were a message plays when the lid is opened.

The packs are fitted with a voice recording and playback unit so that the message will be replayed whenever the packet is opened.

The device was initially tested on women between the ages of 16 and 24, as this remains one of the groups with high smoking rates.

Volunteers said that they found the messages about fertility “hard-hitting” and “off-putting.”

Girls aged 16-17 in particular said that it would make them think about quitting.

However, other volunteer said that the messages could lead them to quitting or cutting back simply because they were so annoying.

One woman said: “Some people would maybe say I need to pack that in because the packets are doing my nut in.”

Researcher Crawford Moodie, one of the researchers, said: “It is possible in the future we may see packs that play music or talk, so we wanted to see if that could be used for our purposes.”

Any changes to packaging would require new legislation to force companies into using them. However, campaigners have welcomed the idea.