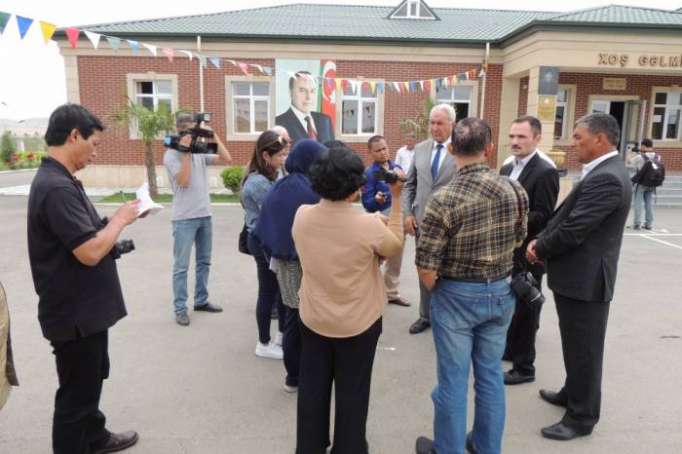 The Indonesian journalists, who were invited to Azerbaijan by members of the Organization of Islamic Cooperation, have visited Jojug Marjanli village of Jabrayil district, which was retaken from Armenian occupation.

After visiting a memorial to April martyrs in Horadiz, the journalists arrived at the Jojug Marjanli secondary school.

The Indonesian media representatives were briefed on the atrocities committed by Armenians in the occupied Azerbaijani lands, as well as the measures taken to rehabilitate the village.

After familiarizing themselves with the school, the journalists visited the Jojug Marjanli mosque and prayed there. They were informed that the Armenian armed forces conducted ethnic cleansing policy in the occupied territories, expelled the Azerbaijanis from their ancestral lands, and burnt down the residential settlements, historical and religious monuments.

A newly-built Jojug Marjanli mosque is a reminiscent of famous Shusha mosque and this is of symbolic nature.

The Indonesian journalists were informed of the Armenia-Azerbaijan Nagorno-Karabakh conflict, the life of the villagers who returned to the liberated Jojug Marjanli. They were informed that as a result of Armenia’s military aggression 20 per cent of the Azerbaijani territories was occupied, thousands of Azerbaijanis were killed and injured. More than one million Azerbaijanis in the occupied territories became refugees and internally displaced persons in their own country.

The Indonesian journalists then familiarized themselves with the service and living conditions of servicemen on the frontline, and watched the ruins of houses destroyed by the Armenian armed forces, as well as the occupied territories of Azerbaijan.

In his interview with journalists, chairman of the Association of Journalists of the OIC member states Fazil Abbasov noted that the organization aims to restore and strengthen the relations among Islamic countries.

Sharing his impressions on the trip, representative of the Indonesian ANTARA news agency Bambang Purvanto hailed the beauty and development of Azerbaijan. He expressed his hope that the relations between Azerbaijan and Indonesia will continue developing.

Another Indonesian journalist Nia Amira said: “I have been raising awareness of the Indonesian public about Azerbaijan, particularly Karabakh for two years. I also wrote poems about Karabakh people and Karabakh horses. I organized a workshop and screening of a film about the Khojaly tragedy at the Islamic University in Jakarta. I believe that the lands of Karabakh would be liberated from the Armenian occupation, and the people could return back to their homes to live a happy life there."