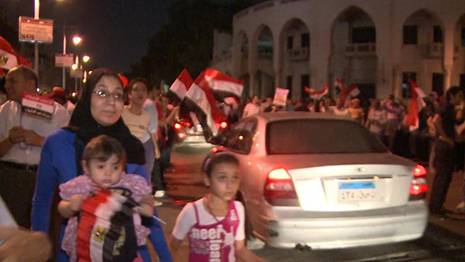 Egyptian President Mohammed Morsi has rejected the army`s 48-hour ultimatum to resolve the country`s deadly crisis, saying it will only sow confusion.
President Morsi insists he will continue with his own plans for national reconciliation, a presidential statement said early on Tuesday.

The army has warned it will intervene if the government and its opponents fail to heed "the will of the people".

However, it denies that the ultimatum amounts to a coup.

If accepted, he would join at least five other ministers who have already reportedly resigned over the political crisis.

On Sunday, millions rallied nationwide, urging the president to step down.

Large protests continued on Monday, and eight people died as activists stormed and ransacked Cairo`s Muslim Brotherhood headquarters, to which the president belongs.

President Morsi`s opponents accuse him of putting the Brotherhood`s interests ahead of the country`s as a whole.

He became Egypt`s first Islamist president on 30 June 2012, after winning an election considered free and fair following the 2011 revolution that toppled Hosni Mubarak.

Coup in the making?
In an announcement read out on Egyptian TV, Gen Abdel Fattah al-Sisi, defence minister and head of the armed forces, described the protests as an "unprecedented" expression of the popular will.

If the people`s demands were not met, he said, the military would have to take responsibility for a plan for the future.

But while he said the army would not get involved in politics or government, his words were seen by many as a coup in the making.

Noisy celebrations erupted in Cairo as protesters interpreted the army`s ultimatum as spelling the end of Mr Morsi`s rule.

Tens of thousands of flag-waving supporters of Tamarod (Rebel) - the opposition movement behind the protests - partied in Cairo`s Tahrir Square late into the night.

Meanwhile senior Brotherhood figure Muhammad al-Biltaji urged pro-Morsi supporters to "call their families in all Egyptian governorates and villages to be prepared to take to the streets and fill squares" to support their president.

"Any coup of any sort will only pass over our dead bodies," he said to a roar from thousands gathered outside the Rab`ah al-Adawiyah mosque in Cairo`s Nasr district.

There were reports of gun clashes between rival factions in the city of Suez, east of the capital, on Monday night.

The army later issued a second statement on its Facebook page emphasising that it "does not aspire to rule and will not overstep its prescribed role".

According to Tuesday`s presidential statement, President Morsi was not consulted ahead of the ultimatum announcement. It said that such action would "cause confusion in the complex national environment".

Given the inability of politicians from all sides to agree until now, the 48-hour ultimatum makes it unlikely Mr Morsi can survive in power, says the BBC`s Aleem Maqbool in Cairo.

Obama calls for restraint
The opposition movement had given Mr Morsi until Tuesday afternoon to step down and call fresh presidential elections, or else face a campaign of civil disobedience.

On Saturday, the group said it had collected more than 22 million signatures - more than a quarter of Egypt`s population - in support.

And on Monday the ministers of tourism, environment, communication, water utilities and legal affairs reportedly resigned in an act of "solidarity with the people`s demand to overthrow the regime".

But Mr Morsi was defiant in an interview published on Sunday, rejecting calls for early presidential elections.

The Egyptian president has reportedly spoken by phone with US President Barack Obama, but details of the conversation have not been made public.

The US president had earlier called for restraint on all sides, saying the potential for violence remained.

Are you in Egypt? Have you been protesting? What do you think about the current situation in the country? Please get in touch using the form below.