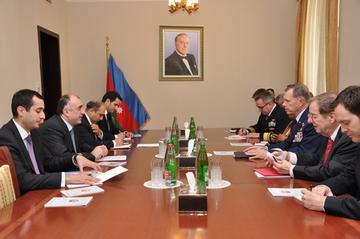 Azerbaijani Foreign Minister Elmar Mammadyarov has met U.S. Deputy Assistant Secretary of Defense for Russia, Ukraine and Eurasia Evelyn Farkas.
They discussed prospects for developing the Azerbaijan-US relations, ongoing processes in the region as well as strategic partnership between the two countries.

The Azerbaijan-NATO cooperation was also discussed, and Farkas lauded the country`s contributions to the ISAF mission in Afghanistan.

The FM provided an insight into the Armenia-Azerbaijan Nagorno-Karabakh conflict. He said that withdrawal of the Armenian armed forces from occupied lands of Azerbaijan would open up huge opportunities for settling the conflict.

Mammadyarov said the conflict was posing serious threat to stability and security of the region.