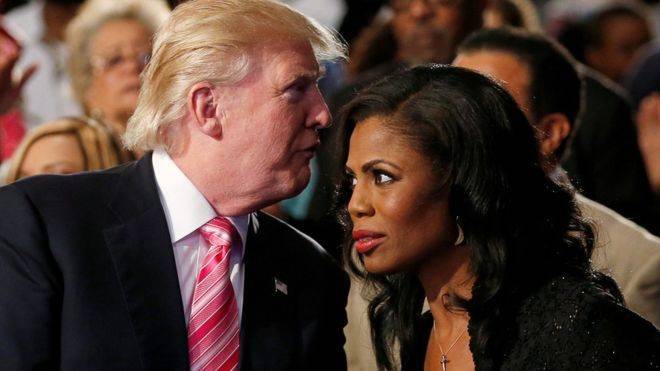 A former adviser to Donald Trump has released what she says is a tape of a phone call from the US president after her dismissal last year.

In the tape played on US TV channel NBC, a voice presumed to be Mr Trump's expresses surprise at Omarosa Manigault Newman being fired the previous day.

"Nobody even told me about it," the male voice can be heard saying.

She is releasing a memoir soon and the White House have described her as a disgruntled ex-employee.

Ms Manigault Newman knew the president from her days as a star of The Apprentice reality TV show, and advised him on African-American issues during the 2016 election before taking a communications role in the White House.

"Wacky Omarosa" the president calls her. He has a point: her disclosures are hugely entertaining - and embarrassing for the president.

Through her book and TV appearances, she's exposed private conversations and the inner workings of an unconventional administration, but she hasn't exposed any serious wrongdoing, and it's unlikely she will.

She worked in the office of public liaison, focusing on outreach to the African-American community, and didn't have access to top-level secrets.

I'd often see her float in and out of White House events, leaving them early if they got boring, or showing her friends around the place and inviting them to the White House mess for coffee.

Her revelations are now creating a stir for a reality-TV-star-studded West Wing but this episode's likely to end soon.

What does the 'Trump tape' say?

In the excerpt broadcast, the voice said to be the president's tells Ms Manigault Newman he has seen on the news that she is "thinking of leaving" and asks, "What's going on?"

"General Kelly came to me and said that you guys wanted me to leave," she replies.

"No... Nobody even told me about it," the voice replies. "You know they run a big operation but I didn't know it. I didn't know that. Damn it. I don't love you leaving at all."

Why did Manigault Newman lose her job?

Her dismissal was announced on 13 December amid US media reports that she had annoyed colleagues.

In a recording she released of her dismissal, the man assumed to be Mr Kelly speaks of "significant integrity issues" as the reason for firing her, mentioning her use of government vehicles.

"There are some serious legal issues that have been violated and you're open to some legal action that we hope, we think, we can control," he says at one point.

He also says: "If we make this a friendly departure... you can look at your time here in the White House as a year of service to the nation and then you can go on without any type of difficulty in the future relative to your reputation."

When Ms Manigault Newman asks if President Trump is aware of what is happening, he brushes the question aside, saying, "Let's not go down the road. This is non-negotiable discussion."

Defending publishing the conversations, she said she had "protected" herself "because this is a White House where everybody lies".

Mr Trump tweeted that she had signed a non-disclosure agreement, which presumably was meant to prevent her from revealing what had gone on at work.

Non-disclosure agreements were presented to senior White House staff in April of last year, the New York Times reports, but no penalties were specified for breaking them.

Ethics lawyer Norm Eisen, who served under former President Barack Obama, suggested to the paper such agreements might be a civil rights violation.

What does her book say?

The most explosive allegation in Unhinged is that there is a tape of Mr Trump using the N-word during filming for The Apprentice.

The White House has said her claims about his language are false.

The book indicates that her view on President Trump has also changed.

She now says the president is a racist, contradicting what she said when she was fired.