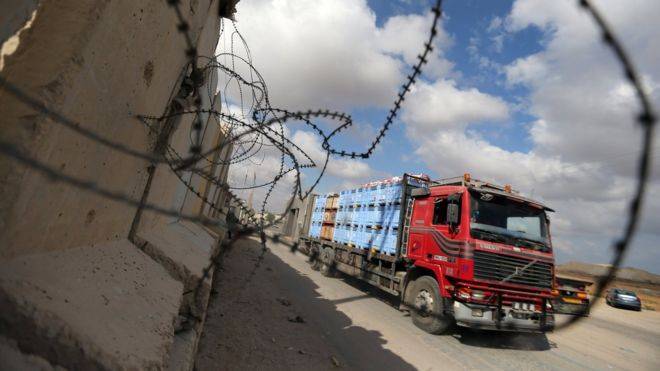 Israel has fully reopened its cargo crossing with Gaza, saying it is in response to a period of relative calm.

Lorries carrying fuel and commercial goods passed through Kerem Shalom on Wednesday after weeks of restrictions.

The fishing zone off Gaza's coast was also restored to 17km (nine nautical miles), having been reduced to 6km.

Kerem Shalom was closed for all but humanitarian deliveries in retaliation for cross-border incendiary kite and balloon attacks by Palestinians.

Kerem Shalom is the main lifeline for the two million people living in Gaza, and the territory's economy is almost entirely dependent on it.

Israeli Prime Minister Benjamin Netanyahu and Defence Minister Avigdor Lieberman promised to use a "heavy hand" with the Palestinian militant group Hamas, which dominates Gaza, when they imposed tighter restrictions on the use of Kerem Shalom on 9 July.

They demanded Hamas stopped the launching of incendiary balloons and kites that have sparked hundreds of fires in southern Israel since April, burning more than 3,000 hectares (7,400 acres) of forest and farmland and causing hundreds of thousands of dollars of damage.

However, the arson attacks did not stop and there have been several flare-ups in violence that have raised fears of a new war.

Last Wednesday night, militants fired more than 180 rockets and mortars into southern Israel, and the Israeli military carried out more than 150 air strikes on "military and strategic" targets in Gaza. The escalation left three Palestinians dead and seven civilians in Israel injured.

A truce mediated by Egypt and the UN reportedly took effect the following night, and there have been fewer reports of incendiary devices being launched since.In a message posted in Arabic on Facebook on Wednesday morning, Mr Lieberman said he had decided to reopen Kerem Shalom and extend the fishing zone "as a clear message to the residents of the Gaza Strip: peace and quiet are worth it and violence is not".

"The residents of Gaza have much to gain when the citizens of Israel enjoy peace and security, and much to lose when quiet is disturbed."

Mr Lieberman accused the leadership of Hamas of using civilians "as live ammunition and as human shields" and warned: "If Hamas turns to violence again, we will respond immediately and in a much more severe manner than before."

More than 160 Palestinians have been killed by Israeli forces since the end of March - most during protests along the Gaza-Israel border at which thousands have expressed their support for the declared right of Palestinian refugees to return to their ancestral homes in what is now Israel.

One Israeli soldier has been shot dead by a Palestinian sniper during the same period.

The BBC's Yolande Knell in Gaza says the reopening of Kerem Shalom crossing has raised hopes that Egypt and the United Nations could be getting closer to negotiating a more comprehensive truce between Israel and Hamas that would prevent another escalation and ease the severe economic hardship in Gaza.

Image copyrightAFPImage captionIsrael limited Gaza's fishing zone to three nautical miles last month
On Tuesday, Israel's finance minister confirmed a report that Mr Netanyahu had secretly met Egyptian President Abdul Fattah al-Sisi in Egypt in May. The two men are believed to have discussed the terms for a ceasefire, the easing of the blockade of Gaza, and the rebuilding of its infrastructure.

Israel and Egypt imposed a land, sea and air blockade on Gaza when Hamas reinforced its power over the territory in 2007 by ousting its rivals, a year after winning legislative elections. The two countries say the blockade is for self-defence.

In a separate development on Tuesday, the UN agency for Palestinian refugees said that it might not be able to open schools for more than half a million children in Gaza, the West Bank, Jordan, Syria and Lebanon this month because it had run out of money to pay their 22,000 teachers.

Unrwa officials said the decision by US - which has long been the agency's largest single donor - to withhold $305m (£240m) of funding this year was the main cause of the financial crisis. The Trump administration has said it will withhold funds until Unrwa makes unspecified "reforms".
Related