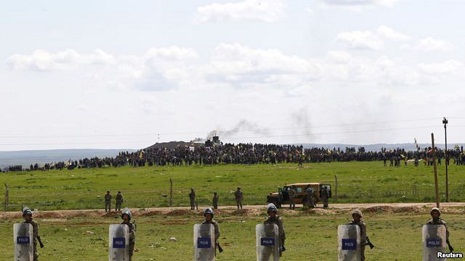 Turkish authorities say they have deported nine Britons who were arrested in southern Turkey April 1 while trying to enter neighboring Syria illegally to join militant groups.
Their case drew international media attention after it emerged the group included four children, one just a year old, and the son of a British politician.

The mid-week announcement of the deportation of 21-year-old Waheed Ahmed and eight other British nationals is being hailed by Turkish officials as an example of their vigilance and determination to stop the flow of foreign recruits to the self-styled Islamic State and other jihadist groups in Syria.

Turkey has been criticized repeatedly by its Western allies for not doing enough to intercept European nationals seeking to join jihadists in Syria - and even of aiding such groups by allowing arms supplies to reach them.

In recent weeks, however, Ankara has been showcasing its efforts to control its border with Syria, inviting international camera crews into detention centers at Istanbul’s airports to show how they weed out travelers suspected of planning to join jihadist groups, including al-Qaida affiliate Jabhat al-Nusra, in Syria.

Last week, Turkish Foreign Minister Mevlut Cavusoglu told foreign diplomats that his country has imposed travel bans on more than 12,500 foreigners suspected of wanting to join jihadist groups and deported another 1,200 who managed to enter Turkey. He told Western diplomats also that European Union countries need to do more to stop foreign recruits from leaving their own countries.

Fighters have traveled to Syria from more than 90 countries, including an estimated 6,000 from Western states, among them 150 Americans, according to estimates by U.S. counterterrorism officials.

Turkish President Recep Tayyip Erdogan has been involved in several spats during news conferences with foreign journalists over allegations his government assisted jihadists. In one confrontation during a visit to Sweden, he angrily demanded that journalists offer proof.

“It is out of the question that organizations like al-Qaida or al-Nusra could take shelter in our country. This is slander and lies,” Erdogan said.

Syrian rebel commanders say, this year, they have noticed a beefing up by Turkey of security along the border.

"Jihadist visibility is less along the Turkish side of the border,” one commander told VOA.

There are also signs of greater surveillance at southern Turkey`s domestic airports serving the border towns of Gaziantep, Hatay and Urfa. Foreign nationals traveling to the border after arriving in Istanbul from abroad appear more often to use buses rather than domestic flights now in a bid to escape surveillance.

The toughening of Ankara’s efforts to stem the flow of jihadists, however, and the improvement in intelligence sharing by European countries, comes as more embarrassing allegations surface of past Turkish intelligence involvement with jihadist groups, including facilitating the transportation into Syria of cars and trucks stolen in Turkey.

A gendarmerie officer testified during a closed-door hearing last week that members of the country’s National Intelligence Organization, or MIT, had been involved in the trafficking into Syria of the vehicles stolen. A police investigation with which he was involved discovered that in 2013, hundreds of cars were stolen in Istanbul and then transported to the border in groups of three to five vehicles with an escort car bearing a police license tag.

Twenty people were arrested in the car-trafficking ring, three of whom were found to have ties to Jabhat al-Nusra. The officer said the gendarmerie notified MIT about the investigation and alleged involvement of intelligence officers.

The testimony, first reported by Turkey’s daily Milliyet, was given during a closed-door hearing, part of an arraignment by a special court of gendarmes who in early 2014 intercepted a convoy - protected allegedly by Turkish intelligence officers - of Syria-bound trucks carrying arms for radical and jihadist groups fighting Syrian President Bashar al-Assad.

The arms convoy was intercepted by local prosecutors and gendarmes in the southern Turkish city of Adana after they received a tip-off, triggering a confrontation with MIT agents who were protecting the convoy. Nineteen gendarmes involved in the interception are facing trial on spying and terrorism-related charges with the arraignment having started last week. Thirty-four gendarmes in all are being investigated.

The gendarmes said they concluded that the destination for the weapons was Jabhat al-Nusra. One of the truck drivers said in a court deposition the weapons were loaded onto the vehicles at Ankara airport and there had been several similar convoys before with MIT involvement.

Government officials insist the trucks halted at Adana were carrying humanitarian aid. The testimonials from the gendarmes in their arraignment - including the details of the car-trafficking ring - are not helping the Turkish government lay to rest claims of past MIT assistance to radical armed groups in Syria.

According to leaked testimony supplied to Grihat.com, an online news site, Adana public prosecutor Aziz Takci issued orders for the gendarmes to intercept, search and seize the trucks.

When the gendarmerie stopped the trucks, members of the MIT refused to identify themselves. According to one gendarme - who was given the initials ÖK - while the trucks were being hauled away after the interception, about 300 police special forces who arrived by order of the state governor, secured the vehicles and handed them back to the MIT agents.

Another officer named HÖ testified that, during the search, he found mortar shells and heavy armament.

“We recorded these according to the prosecutor`s orders,” he said. Takci, who ordered the interception, insists he fulfilled his mandate according to the law. As details emerged of the arraignment, he tweeted, “MIT was on the wrong side of the law.”