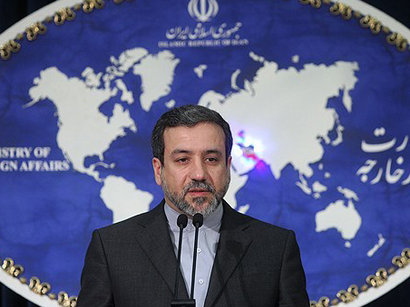 "The conflicting parties are interested in resolving the conflict with the help of the OSCE Minsk Group," he added. "But if Azerbaijan and Armenia want, Iran is also ready to assist in solving this problem."

While answering the question about the upcoming presidential elections in Azerbaijan, Araghchi said that their holding is Azerbaijan`s internal affair.

He expressed hope that they will be carried out on the basis of the desire of the Azerbaijani people and will be successful.

"Iran and Azerbaijan are two friendly countries which are bound by historical, political, economic and cultural ties," he added.

The conflict between the two South Caucasus countries began in 1988 when Armenia made territorial claims against Azerbaijan. Armenian armed forces have occupied 20 percent of Azerbaijan since 1992, including the Nagorno-Karabakh region and seven surrounding districts.

Azerbaijan and Armenia signed a ceasefire agreement in 1994.The co-chairs of the OSCE Minsk Group - Russia, France and the U.S. are currently holding peace negotiations.

Armenia has not yet implemented four U.N. Security Council resolutions on the liberation of the Nagorno-Karabakh and the surrounding regions.