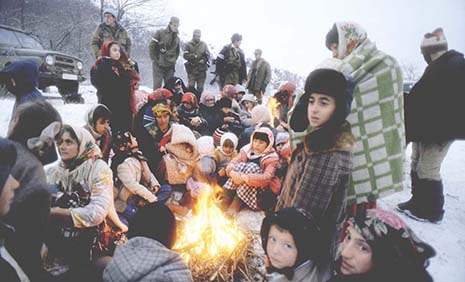 During the last two hundred years as a result of complicated political processes taking place in the region Azerbaijanis have been subjected to forced resettlement, ethnic cleansing and deportation policies in their native lands. After the signing of Gulistan (1813), Turkmenchay (1828) Treaties between Iran and Russia and Andrianopol Treaty between Russia and Turkey the mass relocation of Armenians from Iran and Turkey in lands of Azerbaijan was carried out. Azerbaijanis in the occupied lands were artificially made as refugees and IDPs. Armenians carried out their plans in stages. Firstly, they have created small Republic of Armenia (9.7 min kv.km) in Azerbaijan lands, i.e. in the former Iravan Khanate (the Yerevan province) and gradually increased its territory to 29.8 thousand sq.km. Azerbaijan, which declared its independence on May 28, 1918 again faced with territorial claims of Armenian nationalists. Then the idea of creation of Armenian state in the territory of Erivan khanate, which in the past was included in Russia as Azerbaijani khanate, was put forward. At that time the politicians of Azerbaijan had to go certain concessions in accordance with historical conditions. As a result of insidious policy of pro-Armenian forces and nationalists the Armenian state was created in Azerbaijani lands with capital in the city of Yerevan. In 1923, by the aid of Moscow, Nagorno-Karabakh Autonomous Region was created in the territory of Azerbaijan settled with a small number of Armenians.

After this, the forcible removal of Azerbaijanis from their native places and ethnic cleansing policy against them entered in a new stage. As a result, within two different periods of the twentieth century, millions of our compatriots were withdrawn from their historical lands, became the victims of the policy of ethnic cleansing and became IDPs.
During the events occurring in 1905-1907 and in 1918-1920 using the armed forces and the violent methods thousands Azerbaijanis were murdered, their villages were destroyed, civilians were made as refugees and internally displaced. In April 28, 1920, after the establishment of Soviet powers in Azerbaijan the Armenians does not leave their dirty intentions, and continued their territorial claims against Azerbaijan. At that time under the name of determination of borders the Azerbaijani villages were gradually included in Armenia. The local Azerbaijani population of villages was forced to leave their native homes in different ways. Azerbaijan, which declared its independence on May 28, 1918 again faced with territorial claims of Armenian nationalists. Then the idea of creation of Armenian state in the territory of Erivan khanate, which in the past was included in Russia as Azerbaijani khanate, was put forward.

As a result of insidious policy of pro-Armenian forces and nationalists the Armenian state was created in Azerbaijani lands with capital in the city of Yerevan. In 1923, by the aid of Moscow, Nagorno-Karabakh Autonomous Region was created in the territory of Azerbaijan settled with a small number of Armenians.

Basing on Decision of former the USSR Council of Ministers dated December 23, 1947 "On resettlement of collective farmers and other people from the Armenian SSR to the Kura-Araz lowland of Azerbaijan SSR” 150 thousand Azerbaijanis were forced to leave their native lands. The historical falsification, distortion, and changing the historical names of Azerbaijani lands are an integral part of the aggressive policy of Armenians to make Armenia a mono-ethnic state. In this way thousands of Azerbaijani toponyms has been deleted in 1935-1989 from maps.

In 1985 after being elected head of the M. Gorbachev of the Soviet Union Armenians using his favor had activated their claims for creation of "Greater Armenia". During 1988-1992 the policy of ethnic cleansing against Azerbaijanis in the territory of Armenia was carried out with an unprecedented cruelty and atrocity, 250 thousand of our compatriots expelled from their native lands and become refugees. As early as 1828-30 with the help of Russia in the central part of Azerbaijan the Armenians settled in Nagorno-Karabakh repeatedly tried to separate Nagorno-Karabakhfrom Azerbaijan.

Leaning to their supporters in 1988, the armed forces of Armenia again put forward the issue of annexation of Nagorno-Karabakh region of Azerbaijan, which is an integral part, to Armenia. 1988-1992 As a result of military aggression of armed forces of Armenia against our country 20 percent of Azerbaijan - Nagorno-Karabakh, as well as the adjacent 7 regions (Agdam, Fizuli, Lachin, Gubadli, Jabrail, Zangilan and Kalbajar) was occupied, about one million our compatriots became refugees and internally displaced persons. One of the most tragic events of the twentieth century, committed during this period. Khojaly city with 6000 Azerbaijanis living in Nagorno-Karabakh was destroyed by Armenian armed forces with the help of Soviet troops in a night, 613 civilians were brutally killed, and 150 people were missing. 1000 people became invalid at this bloody tragedy, 1275 old people, women and children taken hostage and subjected to the terrible insults, oppression and humiliation.

The UN Security Council had adopted resolutions Nos 822, 853, 874 and 884 in 1993 on soonest settlement of the conflict by peaceful means, the liberation of the occupied territories, on the return of refugees and internally displaced persons to their homes. However, Armenia does not comply with any of these resolutions. There is information about approximately one million Azerbaijani refugees and internally displaced persons formed as a result of military aggression and occupation of 20 percent of the lands of Azerbaijan in1988-1992 by the Armenian armed forces, measures to improve their social conditions and living conditions, current needs, etc.

As a result of the military aggression of Armenian armed forces during 1988-1992 against our country the 20% of the Azerbaijani lands, including Nagorno Karabakh and 7 adjacent regions were occupied and 700 thousand our compatriots were withdrawn from settlements around the Armenian or Nagorno Karabakh regions and turned to be refugees and IDP-s and were temporary resettled in 62 cities and regions, over 1600 residence objects.

Thus, at present there are about one million refugees and internally displaced persons in Azerbaijan.