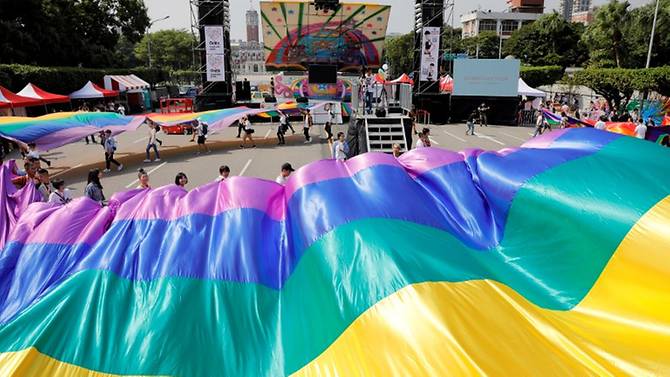 Hundreds of thousands marched through Taiwan’s capital on Saturday to press the government to deliver on its promise of marriage equality amid an increasingly heated debate over whether civil laws should recognize same-sex marriage, Reuters reports.

In Asia’s first such ruling, Taiwan’s constitutional court declared in May last year that same-sex couples had the right to legally marry, and set a two-year deadline for legalization.

But the self-ruled island will hold a series of public votes on same-sex marriage on November 24, after its election authority approved separate referendum petitions from both conservative and rights groups.

The move has revived a debate over a possible separate law for civil unions between gay couples and presents a challenge to President Tsai Ing-wen, who rights activists say has made little progress on the issue despite campaigning on a promise of marriage equality in the run-up to elections in 2016.

The 16th annual parade in Taipei, the largest of its kind in East Asia, featured colorful costumes, musical performances and rainbow flags as protesters gathered near the Presidential Office.

Many called the proposal to make a separate law for gay marriage “discriminatory”, citing the 2017 ruling that current laws violate the right to freedom of marriage and equality.

“We will use our vote to tell Tsai Ing-wen’s government that people want marriage equality,” said Miao Poya, who joined the parade and was one of the activists who proposed a referendum in favor of same-sex marriage.

Society is still divided on same-sex marriage, Tsai said this year, but the government would abide by the constitutional court ruling of May 2017.

The public votes will coincide with mayoral and magisterial elections on the democratic island, which is seen as a beacon of liberalism in the region.