Potatoes are actually a healthy food — without butter and other fixings 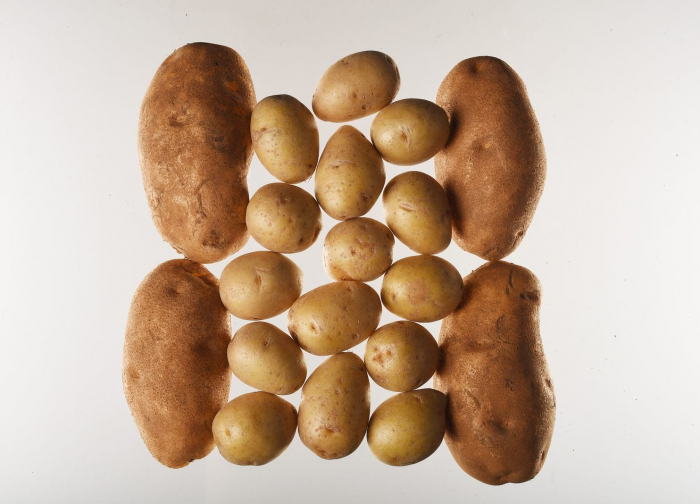 They’ve been maligned in nutrition circles for decades, with links to obesity, Type 2 diabetes and cardiovascular disease. But they’re also highly satisfying and provide many essential nutrients.

So are potatoes good for you or not?

“Potatoes have gotten a bad rap because of the way they’ve been eaten and processed in the modern food system,” says Charles Mueller, a clinical associate professor in the Department of Nutrition and Food Studies at New York University.

Undoctored potatoes are healthy, Mueller says. They supply a good mix of nutrients. It’s when people deep-fry them in oil or smother them in butter, sour cream or salt that spuds turn into nutritional duds.

A medium-size white baked potato with skin has 159 calories, 36 grams of carbs and nearly 4 grams of fiber. Potatoes also are packed with a healthy mixture of vitamins and minerals such as magnesium, potassium, and vitamins B6 and C. A medium potato, for example, supplies about 15 percent of your daily need for magnesium and about 20 percent of your daily potassium need.

And few Americans get the daily recommended amount of fiber, which has a slew of health benefits, such as helping to curb cholesterol, protecting against diabetes, controlling weight and even lowering the risk of colorectal cancer. Most adults need about 25 to 30 grams of fiber per day. If you eat a medium potato with skin, you’ll get about 4 grams. If you eat one without it, you’ll get only about 3 grams. “It’s always good to eat potatoes with the skin,” says Mueller, “because you pick up some fiber.”

Still, many diet experts advise going easy on potatoes because of their high glycemic index rating. The carbohydrates in a food with a high GI are digested quickly, leading to a rapid spike and then dip in blood sugar and insulin levels. These effects can cause people to overeat and may raise the risk of obesity, Type 2 diabetes and heart disease.

But Mueller says that you can greatly minimize the boost in blood sugar from potatoes if you eat them as part of a healthy meal that includes protein.

Another way to minimize the GI effect of potatoes is to cool them after cooking and either eat them cold (as in a potato salad) or reheat them. This alters the chemical structure of the potato’s carbohydrates and forms resistant starch, a type of fermentable fiber that may lower blood sugar levels after a meal and have other health benefits.

Additionally, Klosz says, when you compare potatoes with some other high GI staples, such as white rice, they’re actually much lower in calories and carbs and supply more fiber.

For most people, having potatoes a couple of times a week can be part of a healthy diet, Mueller says. But only if you watch your serving size and what you put on them: Even when eaten fresh, dousing them in butter or cream might negate their health benefits.

That might at least partially explain the findings of some observational studies, such as those from Harvard researchers, which found that eating potatoes frequently may increase the risk of high blood pressure, Type 2 diabetes and weight gain.

In one of the studies, people who ate potatoes two to four times per week had a modest increase in Type 2 diabetes risk — 7 percent — compared with those who ate them less than once a week. Those who had seven servings a week, however, had a 33 percent increased risk. While all forms of potatoes — baked, boiled, fried and mashed — were linked to the disease, french fries were most problematic.

That also was the case in the other Harvard studies. For instance, people who ate four or more servings of baked, boiled or mashed potatoes had an 11 percent increased risk of high blood pressure compared with those who ate them less than once a month. For french fries, the risk was 17 percent higher.

A range of colors

In addition to white potatoes, you can find yellow, purple and red-fleshed varieties. The colors come from compounds in the plants called phytochemicals such as anthocyanins, carotenoids and flavonoids. These have antioxidant properties and may protect against cardiovascular disease, cancer and other chronic ailments.

What about sweet potatoes? Technically, they’re not potatoes — they aren’t part of the same plant family — and they may be a little healthier. A medium sweet potato is just slightly lower in calories and carbs (147 calories; 35 grams of carbs) than a same-size white version, but it has about one more gram of fiber. And it provides enough carotenoids to supply more than five times your daily recommended dose of vitamin A.

Good ways to prepare them

It’s pretty simple: Go easy on the potato toppings and add-ons. Just one pat of butter and two tablespoons of sour cream add about 100 calories and 9 grams of fat. The same goes for sweet potatoes. Adding marshmallows, butter and brown sugar ups the fat and sugar load significantly. And avoid canned varieties packed in heavy syrup.

Fortunately, potatoes — whether sweet or regular — don’t need much to make them tasty. Cut them into cubes and roast with a little rosemary, olive oil, and salt and pepper; or boil or microwave them whole. When eating them baked or mashed, keep the condiments to a minimum.