Apec leaders at odds over globalisation and free trade 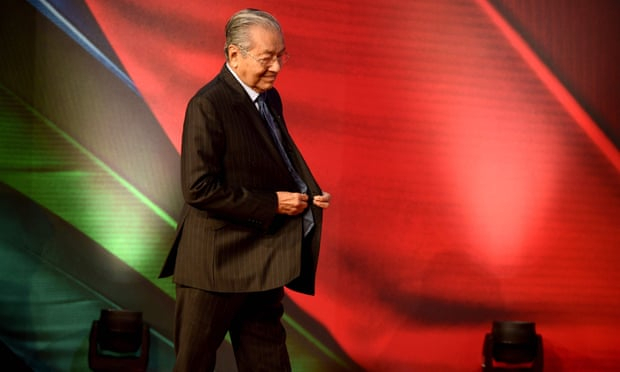 Fault lines were quick to emerge over the future of free trade as leaders gathered for the Asia-Pacific summit on Saturday, with some calling for radical change while others argued for a return to the status quo on globalisation.

Speaking at the Asia Pacific Economic Co-operation (Apec) summit in Papua New Guinea, the Malaysian prime minister, Mahathir Mohamad, warned that globalisation was leaving some people behind and fuelling inequality.

“The benefits of free and fair trade and economic integration have been ruptured, exemplified by Brexit and trade wars between major economies,” he said.

“The trade war between the US and China has amplified further the disruption to our trade and commerce.”

“Our efforts must be about persuading and convincing our peoples again about the domestic benefits,” he said.

Morrison said more than a billion people had been lifted out of extreme poverty since 1991 because of the jobs and more affordable consumer goods that free trade enabled.

His speech was a clear reference to the escalating trade war between the United States and China, along with the general protectionism of the US president, Donald Trump.

“We are witnessing a rising tide of trade protectionism along with financial volatility in some emerging economies,” Morrison said. “The test for us now is to stand up for the economic values we believe in and show how they work.”

Speaking on a cruise ship tethered in Port Moresby’s Fairfax Harbour, the Russian prime minister, Dimitry Medvedev, joined Morrison in warning against growing protectionism and argued for clear-cut and transparent rules on trade.

The Russian president, Vladimir Putin, is not attending the Apec summit.

The anti-protectionism sentiment was also echoed by the Chinese president, Xi Jinping.

The shadow of protectionism and unilaterism is hanging over global growth, Xi said, joining his global counterparts in pushing for free trade.

China and the US have been locked in an escalating trade war since Trump won election in 2016.

Trump has skipped the annual meeting of the 21-nation grouping, but the US vice-president, Mike Pence, is attending.

Pence tweeted that he would discuss “Trump’s commitment to prosperity, security and freedom in the Indo-Pacific”.

China has also been at loggerheads with the US over its territorial ambitions in the Pacific, encapsulated by Xi’s Belt and Road Initiative.

Announced in 2013, the initiative aims to bolster a sprawling network of land and sea links with southeast Asia, central Asia, the Middle East, Europe and Africa.

China’s efforts to win friends in the resource-rich Pacific have been watched warily by the traditionally influential powers in the region – Australia and the US.