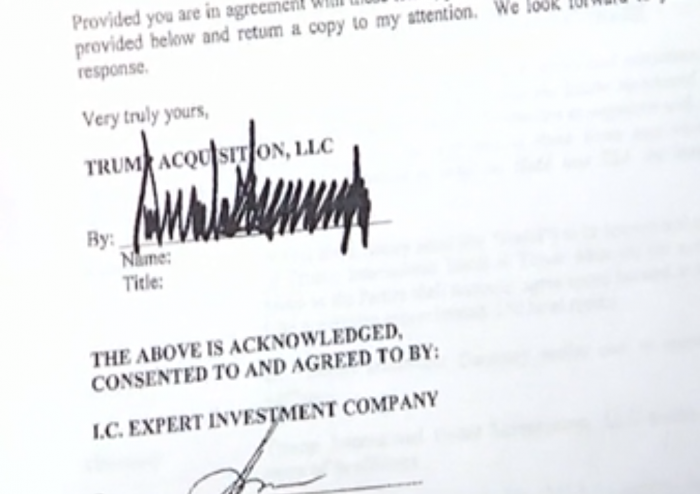 Donald Trump signed a letter of intent to begin negotiations over building a Trump Tower in Russia, a leaked document has revealed, despite the president’s lawyer insisting no such signature existed.

The 2015 letter, obtained by CNN, was a precursor for planned talks between the Trump Organisation and IC Expert Investment, the Russian firm that would have been responsible for developing the project.

On Sunday, Rudy Giuliani, Mr Trump’s lawyer and chief representative, admitted the existence of the letter but insisted “no one signed it”.

Mr Trump himself appeared to refer to the letter in November. Speaking to reporters, the president suggested it had been signed instead by his former lawyer Michael Cohen.

But the document, which has been made public, does appear to feature the president’s idiosyncratic signature, as well as that of Andrey Rozov, owner of IC Expert Investment.

On the 2016 presidential campaign trail, Mr Trump denied having any business interests in Russia, claiming repeatedly he had “nothing to do” with the country.

But the project, which was ultimately scrapped, would have handed the Trump Organisation a $4m (£3.2m) fee, a cut of future sales, and control over marketing and design of what would have been condominiums, a hotel and commercial space in the heart of Moscow.

It would also have given the Trumps the opportunity to name the hotel spa after Mr Trump’s eldest daughter Ivanka.

Mr Cohen admitted in court last month he intentionally misled congress when he claimed talks over the tower had ended months before his then-boss won the Republican Party’s presidential candidacy in June 2016.

Court documents filed by the special counsel investigating the Trump team’s links to Russia show Mr Cohen had discussed with a Russian businessman plans for the tower “as late as approximately June 2016”, and had done so directly with the president multiple times.

Last week, Mr Giuliani suggested conversations between Mr Trump and Mr Cohen over the deal may have gone on until November of that year, the month of the election.

The publication of the letter vindicates Mr Cohen, who told congress in 2017 Mr Trump had signed the document.

The Moscow project is important because it was being pursued while Mr Trump was forging ahead in the race to become president.

During that time, he praised the Russian president Vladimir Putin as “brilliant” and a “strong leader”, and said he would have a “great relationship” with the Kremlin.