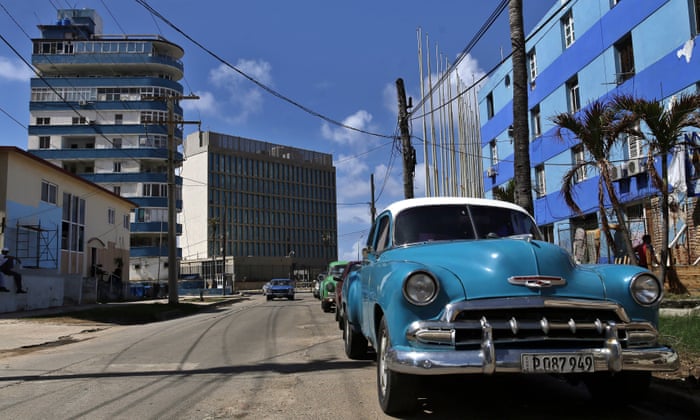 In front of the US Embassy in Havana stands a rusting forest of flagpoles, initially erected to fly 138 black flags to obscure a scrolling electric ticker board installed by the Bush administration to send messages to the Cuban people.

The poles are bare now, and the ticker board was unplugged in 2009 as the Obama administration made the first steps of a negotiation that eventually led the two countries to restore diplomatic relations in 2015.

But over the past two years, the embassy has once again become the centre of a diplomatic intrigue which has put an end to that fragile détente.

Though the cause remains unknown, the Trump administration has said the diplomats were victims of “attacks”, and dramatically slashed its diplomatic staff in Havana.

A string of explanations have been put forward to explain the symptoms – from sonic attacks and weaponised microwaves, to mass hysteria and viral infections.

Real or imagined, deliberate or accidental, the fallout from the incidents has hurt ordinary Cubans.

After increasing sevenfold in the three years since diplomatic relations were restored, the number of Americans visiting Cuba has started to fall sharply, bringing with it a sharp drop in incomes.

US tourists arriving to the island by plane have declined by over a third so far this year.

“Even though we’re in high season, we’re really feeling the drop in US tourists,” says Claudia Laguna, who is now struggling to keep her rental business in the Miramar district of Havana afloat.

After non-essential staff were evacuated, the embassy stopped issuing visas. Cubans must now travel to the US Embassy in Georgetown, Guyana, to apply for official documents – a journey most cannot afford.

Across the island, tens of thousands of people have seen their plans to emigrate and rejoin family abroad put on indefinite hold.

Maritza Damera, 47, a paediatrician, said she would already be living in New Jersey with her husband and youngest daughter if it wasn’t for the drawdown.

“My family is divided. I can’t leave, but I’m not working either. I feel like my life is on hold,” she said from her soviet-style apartment block in East Havana.

Keen to keep relations with the US from unravelling further, the Cuban government’s reaction was initially temperate, but as the saga dragged on its statements became increasingly acerbic, accusing Washington of indulging in “science fiction”.

Carlos Fernández de Cossío, director of US affairs at the Cuban Foreign Ministry, said that even the use of the term “attack” was a “deliberate political manipulation”.

“Up until now the US government has been unable to provide any objective evidence that something happened,” he said in a recent interview with state media.

Another foreign ministry official, speaking on condition of anonymity, described the episode as a “falsification” or “a feint” by the old adversary.

“The people who have benefited from this are the hardliners on both sides,” said former Cuban diplomat, Carlos Alzugaray, pointing to Cuban American rightwingers and factions in the Communist Party wary of rapprochement. “This is a gift to them.”

He scoffed at claims by unnamed US officials in September that communications intercepts indicate Russia may be behind the attacks, arguing that no third party – Cuban, Floridian or Russian – could attack diplomats on the island without the knowledge of state security: “If Russia were to do this they’d need authorisation from the Cubans. And if they were to ask us we’d tell them to go to hell.”

Cuban perceptions of the mystery are shaped by past confrontations with the US, which are regularly reprised in the tightly-controlled state media, commemorated in monuments, and taught at schools.

In 1961, the CIA gave mortars to anti-Castro rebels in Eastern Cubato fire at US-controlled Guantanamo Bay Naval Base then blame Cuba for the attack, creating a pretext for intervention. The plotters were foiled by Cuban intelligence.

The same CIA reportedly helped introduce African swine fever to the island in 1971, in an episode of viral warfare that resulted in the culling of half a million pigs.

And Cuba’s own diplomats have been attacked: in 1980, a member of the Cuban delegation to the United Nations, was shot dead in New York City by the anti-Castro paramilitary group, Omega 7. To this day, the group’s founder, claims he was trained by the CIA.

“Cubans have good reason to be suspicious of the US because of the litany of examples of US officials trying to undermine the Cuban government, from the false flag operations of the early 1960s, to the Bay of Pigs invasion, to the numerous attempts to assassinate Fidel Castro,” said Jonathan Hansen, a historian at Harvard University. “Recent reports of sonic or microwave attacks – whether or not they are real – fit right in with this.”