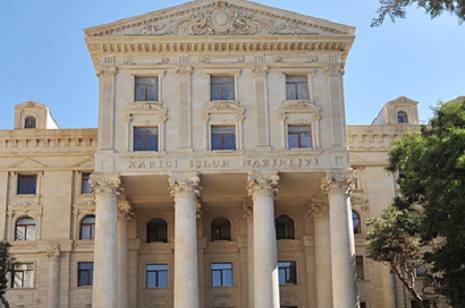 To drive the peace process from the deadlock Armenia should withdraw its troops from the occupied Azerbaijani territories, Azerbaijani Foreign Ministry says.

This position is that to drive the peace process from the deadlock Armenia should at least start withdrawing its troops from the occupied Azerbaijani territories,” spokesman for Azerbaijan`s Foreign Ministry Elman Abdullayev told APA.
Commenting on statements made by Armenian Foreign Minister Edward Nalbandian at today`s press conference with OSCE Chairman-in-Office Leonid Kozhara, Elman Abdullayev noted that start of the withdrawal of Armenian troops from the occupied territories of Azerbaijan may serve as a basis for the continuation of the peace process.

Edward Nalbandian said that at the meeting in Vienna on July 12 the Armenian and Azerbaijani foreign ministers didn`t touch on the possibility to continue the process of settlement of the Nagorno-Karabakh conflict only after liberation of the occupied territories.

Elman Abdullayev said the presence of Armenian Armed Forces in the occupied Azerbaijani territories do not allow to improve the peace process.

“The Armenian side that is attempting to confuse the international community tries to justify is aggressive policy protracting the process of settlement. The world community has already expressed its position on this issue. Armenia is recognized as an aggressor state in all the documents adopted by the international organizations. The world community should properly exert pressure on Yerevan. The lack of the political will and non-constructive position of Armenia impedes the improvement of the peace process,” he said.