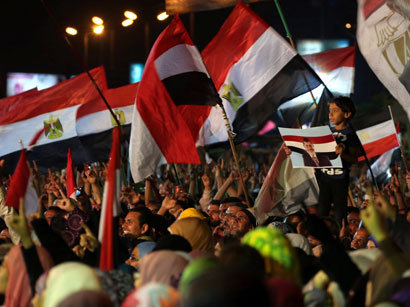 Supporters of Egypt`s deposed president Mohamed Morsi staged mass marches in several Egyptian governorates Monday night, following a call for protests by an Islamist alliance led by the Muslim Brotherhood - from which Morsi hails - to demand his reinstatement, Ahram reported.
Marches were reported in the cities of Alexandria, Luxor, Damanhour and Suez decrying the popularly-backed military overthrow of Morsi on 3 July.

The Muslim Brotherhood has strongly rejected the "blatant coup d`etat" against Morsi, elected in June 2012, and demanded his return to power.

Meanwhile, clashes erupted in Cairo on Monday evening after police forces used teargas to disperse a crowd of Morsi`s supporters who gathered in downtown`s Ramsis Square, as tens of thousands remain in a sit-in several kilmetres away in Rabaa Al-Adawiya Square.