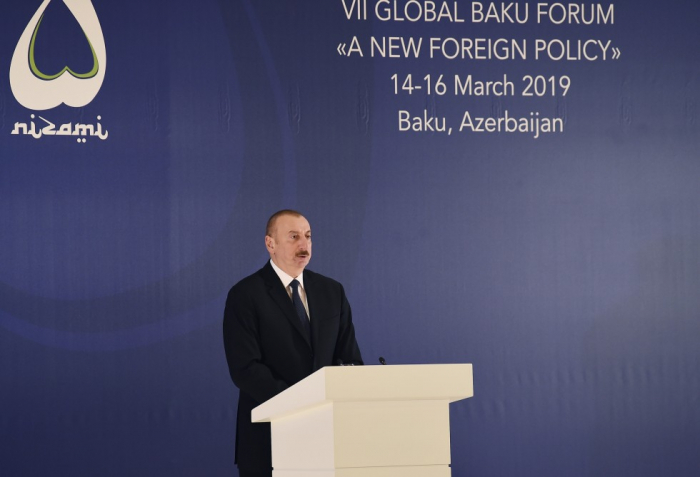 Azerbaijan makes a large contribution to energy security, said the president of the Republic of Azerbaijan in his speech at the 7th Global Baku Forum in Baku, AzVision.az reports.

"We have observed the increase in the number of countries which wants to join our projects. Our transport initiatives help to expand our cooperation with other countries and companies in the energy and transport fields. This is one of our greatest achievements. This cooperation leads to the creation of tens of thousands of jobs in the region. Also, it does not only benefit Azerbaijan but also participating countries," Azerbaijani President Ilham Aliyev stated.

"We have linked the seas with oil and gas pipelines. For the first time in history, the Caspian Sea was connected to the Black and Mediterranean seas by oil pipelines. The Southern Gas Corridor (SGC) has been in operation since 2018. Also, the Trans-Anatolian gas pipeline (TANAP) started gas supplies to Europe on July 1 in 2018.  Currently, we are implementing a Trans Adriatic Pipeline (TAP) project which will connect Azerbaijan, Georgia, Turkey, Bulgaria, Albania, Greece, and Italy. I do believe that this project will be completed this year.

This is a massive infrastructure project in the region and its costs amount to about $40 million dollars. The international financial institutions support this project. This support was achieved through the close cooperation between Azerbaijan and other countries and companies. We have already signed a memorandum of understanding with Balkan countries, Bosnia and Herzegovina, Croatia, Montenegro. Hopefully, we will start cooperation in the next phase", Ilham Aliyev added.