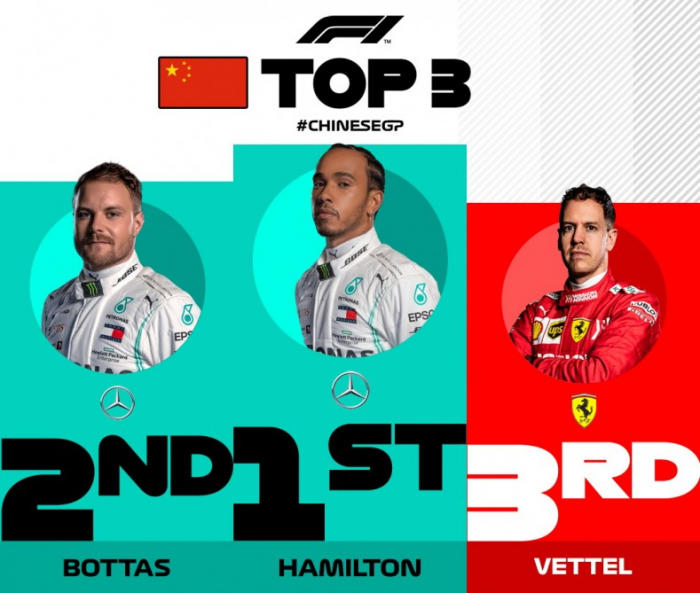 As Formula 1 celebrated the 1000th World Championship race, Lewis Hamilton led home team mate Valtteri Bottas as Mercedes secured their third one-two in as many races to start the 2019 season. On a day when Ferrari had no answer for the Silver Arrows, Sebastian Vettel completed the podium in third.

Hamilton’s win means that Shanghai joins the Hungaroring and the Circuit Gilles Villeneuve on the list of tracks where Hamilton has secured six victories.

Behind the Mercedes pair, Vettel’s podium position was effectively secured when Ferrari team orders saw Charles Leclerc moved over early in the race, with the Bahrain near-victor ending up a frustrating fifth, behind the Red Bull of Max Verstappen.

Sixth was Pierre Gasly, who strapped a new set of soft tyres onto his Red Bull two laps from the end to help him take the extra point for fastest lap.

Renault’s Daniel Ricciardo secured his first finish of the year – and it was a good one too, the Australian ending seventh at the head of the midfield, holding off the Racing Point of Sergio Perez, who used a lightning start from P12 on the grid to finish P8 by the flag.

A strong drive from Alfa Romeo's Kimi Raikkonen saw him finish ninth, while an impressive afternoon from Toro Rosso's Alexander Albon from a pit lane start saw him make a one-stop strategy work to finish P10 after holding off the Haas of Romain Grosjean. The Thai driver’s efforts also saw him earn ‘Driver of The Day’.