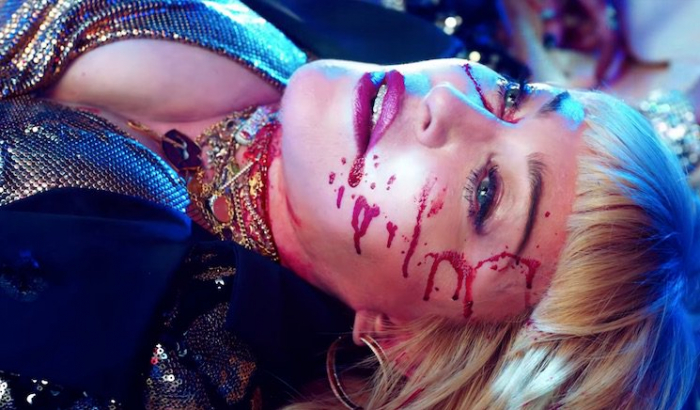 Madonna’s music video for “God Control” has already sparked a strong reaction, with visuals depicting a mass shooting inside of a nightclub.

The video opens with a warning that states: “The story you are about to see is very disturbing. It shows graphic scenes of gun violence. But it’s happening every day. And it has to stop.”

Scenes then show club-goers lying dead on the dancefloor and across the bar after a gunman opens fire.

Patience Carter, who witnessed and survived the Pulse nightclub shooting in Orlando, Florida where 49 people were killed and 53 others injured, told TMZ that the eight-minute video reminded her of the horrific event.

“As a survivor of gun violence it was really hard to watch. Madonna’s caused upset with her new ‘God Control’ music video,” she said.

“I get that she was trying to bring awareness to gun control but I don’t think that was the right way to go about doing it. For someone like me who actually saw these images, lived through these images, to see them again, dramatised for views, I feel it was really insensitive.”

She added: “It was grossly accurate to what I witnessed that night.”

Lyrics on “Gun Control” include: “Get the kids ready, take them to school/ Everybody knows they don’t have a chance/ To get a decent job, to have a normal life. ‘When they talk reforms, it makes me laugh/ They pretend to help, it makes me laugh/ I think I understand why people get a gun.”

“I made this video because I want to draw attention to a crisis that needs to be addressed,” Madonna explained in an interview with People. “‘To me, this is the biggest problem in America right now… I cannot take it anymore.”