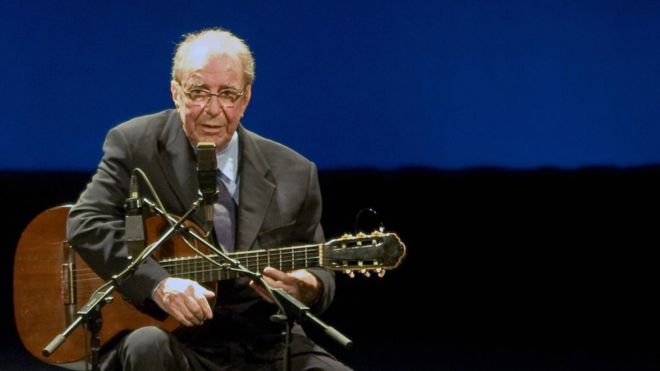 The singer and composer was known best as a pioneer of the bossa nova genre, which found international popularity in the 1960s.

Reports say Gilberto died at home in Rio de Janeiro after a period of illness. His son confirmed the news of his death in a Saturday Facebook post.

"His fight was noble, he tried to maintain dignity," Marcelo Gilberto said.

Born in the north-east state of Bahia in 1931, Gilberto began singing aged 18.

João Gilberto BBC music page
His release of the record Chega de Saudade in the late 1950s was considered a game-changer for Brazilian music.

Gilberto's style - mixing traditional and modern musical influences - inspired bossa nova, or new trend, music and many other artists after him.

In 1964, he famously collaborated with America saxophone player Stan Getz. Their album sold millions of copies and won international praise, including a US Grammy for Album of the year.

A pioneer in his field

His music depicted a period of huge optimism in Brazil: an urban, industrialised country that was building a new capital and dreaming of better times.

His versions of songs like Quiet Nights and The Girl from Ipanema became standards in world music.

For the past decade, João Gilberto lived alone in Rio, struggling with mental health and financial issues.