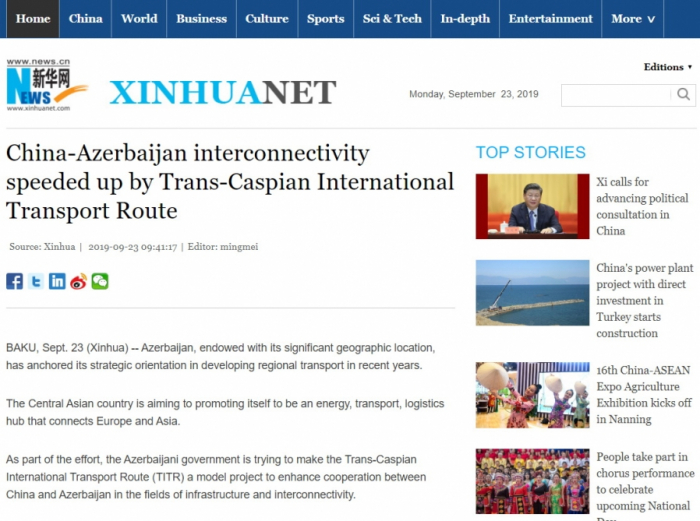 The article reads: “Azerbaijan, endowed with its significant geographic location, has anchored its strategic orientation in developing regional transport in recent years.

The Central Asian country is aiming to promoting itself to be an energy, transport, logistics hub that connects Europe and Asia.

As part of the effort, the Azerbaijani government is trying to make the Trans-Caspian International Transport Route (TITR) a model project to enhance cooperation between China and Azerbaijan in the fields of infrastructure and interconnectivity.

The route covers 3,500 kilometers, connecting Dostyk, Kazakhstan in the east with Baku, Azerbaijan in the west.

The main passage of the route is a railway, part of which involves crossing the Caspian Sea by ferry.”

“In an earlier interview with Xinhua, President Ilham Aliyev reaffirmed huge prospects for cooperation between China and Azerbaijan in the area of transportation.

"We are investing largely in infrastructure to build roads, highways, airports," said the president.

"The construction of the Baku-Tbilisi-Kars railroad that connects Asia and Europe is the shortest transportation route to bring goods from China to Europe and vice versa," he said.”

“Actually, with the joint efforts in recent years, significant results have been achieved in the integration of Azerbaijan's construction of the TITR with China-proposed Belt and Road Initiative.

The operation of the route provides a land transport way linking those countries along it with China, with some 20 days faster than the transport route by sea.

With more planned CRE trains put into operation, the important land route is rejuvenating and witnessing the gear-up of the connectivity of the Belt and Road.

Rafiq Abbasov, professor with the Institute of Oriental Studies of the Azerbaijan National Academy of Sciences, said the TITR is a fast land transport route, which can bring Chinese goods to Europe in some 20 days, much better than the sea route,” the article says.

“The TITR connects China with Europe via Kazakhstan, Azerbaijan and Georgia. Currently, Azerbaijan is coordinating with the countries along the route on reducing tariffs and shortening custom clearance time to attract more international goods to use this route.

The Azerbaijan-China cooperation of mutual benefit in this realm will push a perfect integration of Azerbaijan's vision to become a regional transport hub with China-proposed Belt and Road Initiative, so as to facilitate the regional connectivity and benefit people in the region,” the article concludes.