Why China fears sending the tanks into Hong Kong- OPINION 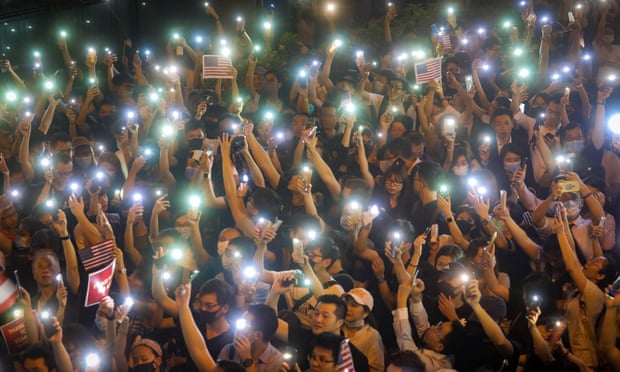 Two decades ago, many scholars began predicting that as China’s creation of wealth continued to speed ahead, the country would cross a threshold. Once a substantial new middle class had been created, they reasoned, politics would tip decisively in a more participatory, possibly even democratic, direction.

But while robust economic growth continued, the first decade of this century came and went with no severe challenge to China’s authoritarian model. And under China’s present leader, Xi Jinping, who took office in 2013, it has only become more entrenched: last year he changed the longstanding rules of succession to allow himself to remain in charge for life.

Now, however, this long-expected revolt of the middle class has arrived – not from China itself, but from Hong Kong. And more than any other problem China faces, the ongoing crisis in the city could determine Xi’s standing and his country’s direction over the next few years.

The problem of open-ended civil unrest in Hong Kong, which has been punctuated by rising acts of violence and vandalism carried out by a distinct but hardline minority, is a reflection of China’s new assertiveness under Xi – an assertiveness that marks a break with the caution of the post-Mao era. It can be seen in Xi’s signature undertaking, the Belt and Road Initiative – an infrastructure building project with global ambitions. Or, most recently, the flaunting of new weapons systems during the military parade commemorating the 70th anniversary of Communist party rule – a declaration of China’s intention to rival American military power more openly than at any time in the recent past.

Under Xi, China has been intervening much more directly in the governance of Hong Kong. The most notable example of this was the abduction to China of Hong Kong booksellers who traded in titles critical of Beijing or historical accounts that undermined Chinese orthodoxy. Beijing has also given quiet but clear support to a variety of restrictions on the city’s democracy that have strongly eroded Hong Kong’s sense of generous if limited legal and political autonomy – a notion captured by Beijing’s own slogan for the city’s dispensation, “one country, two systems”.

Most notably, these have included the banning of pro-democracy political candidates and the proposal in February by Hong Kong’s chief executive, Carrie Lam, of the measure that sparked the ongoing protests: a law that would allow for the extradition of criminal suspects from Hong Kong to mainland China. Public approval of Lam has plummeted since then, and her position hasn’t been helped by her acknowledgment that many of her options are determined by Beijing. This has effectively meant refusing concessions on the protesters’ main demands – such as for direct election of the city’s leaders and an independent investigation of violent abuses by the police – and only recently grudgingly offering to formally withdraw the extradition proposal. Notably, she has also said that Beijing will not allow her to step down, another of the demonstrators’ key demands.

This blocking of any path forward that would permit more self-determination under Chinese sovereignty – as promised when Britain handed Hong Kong back to the mainland in 1997 – has led to a marked radicalisation of Hong Kong’s population this year, and created a revolt of the middle class. The peaceful demonstrations that have regularly drawn hundreds of thousands of residents into the streets since the summer have included many older people, as well as plenty of residents from other segments of the population long assumed to be conservative or at least acquiescent, whether civil servants or business people.

The situation might have unfolded far more gently had the city been handled with more suppleness or tolerance. But the central logic of power under Xi’s leadership has always been to push for more control, both domestically and within the region. The drive to impose tighter reins on Hong Kong now risks all kinds of unwanted damage. This only begins with the radicalisation of the Hong Kong population, and harm to the city’s economy and reputation as a dependable business mecca.

Just in the past fortnight, the effects of the crisis in Hong Kong spread in an unanticipated way to the US. When an executive for an NBA team expressed support on Twitter for the Hong Kong protesters, Chinese companies immediately cut their ties to the American basketball league in lockstep. In a country where most people know little about China, this was the first time that many became aware of the lengths to which Beijing will go to censor speech and impose conformity.

From here, Beijing’s choices in Hong Kong will not grow easier. The ultimate option, of course, is to mount a police or military intervention from the mainland in order to put down the protests. But at what cost? Hong Kong would lose forever its status as a global, cosmopolitan city, a goose that lays golden eggs for China. Since Deng Xiaoping introduced capitalism to China, Hong Kong has served as a critical business and investment portal for the country: a place where foreign companies feel it is safer for them to be based because of the independent judicial system and a banking structure that allows the free conversion of currencies and unlimited international transfers. As China has grown vastly richer it has become less dependent on Hong Kong for such purposes, but lots of investment into China still passes through the city.

A takeover of Hong Kong by force would also destroy Beijing’s proposition – tattered as it may already be – that Taiwan should accept unification with China on the basis of one country, two systems. Recent events in Hong Kong have already strongly lifted the election prospects for the governing party in Taiwan, whose leader Tsai Ing-wen favours continued defiance of Beijing.

Most unpredictable, though, is how this will play in China itself. A catastrophic crackdown in Hong Kong could go very badly for Xi, a leader who has tried to project an aura of resolve and near infallibility. Today Beijing trumpets that its 1.4 billion people stand united in their opposition to Hong Kong’s democracy movement. But that is a claim only sustainable in an environment of suffocating media control in China.

If mass arrests or tanks were used to crush a protest movement aimed at securing democratic concessions, members of China’s own large and growing middle class would begin to see this not just as a defeat for Hong Kong, but as a loss for their own society as well.

Howard W French is an academic and author. His last book is Everything Under the Heavens: How the Past Helps Shape China’s Push for Global Power.