Baku hosts forum of international producers of fruits and vegetables 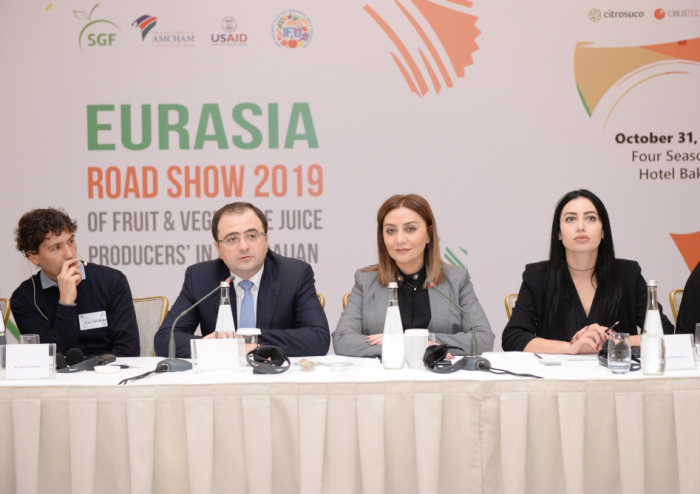 The EURASIAN Forum of SGF International e.V. (SGF) and International Fruit and Vegetable Juice Association (IFU) organized in collaboration with the American Chamber of Commerce in Azerbaijan (AmCham Azerbaijan) and USAID and assisted by Coca Cola Company was held in Baku to support access to international markets for local fruit and vegetable producers.

This forum, held in different continents of the world annually and being fourth in sequence, was previously held in Latin America in 2016, Asia in 2017, and Africa in 2018, AzVision.az reports citing AZERTAC.

Rufat Mammadov, the Deputy Minister of Economy of the Republic of Azerbaijan and Jai Singh, head of USAID Azerbaijan Mission, greeted participants of EURASIA 2018 Forum emphasizing the high importance of this platform in terms of providing access to international markets for entrepreneurs involved in fruit and vegetable production and building cooperation with their foreign counterparts.

“The fact that “EURASIA 2019” Forum is held in Azerbaijan is a very significant event for the agricultural sector of the country. This Forum provides a unique opportunity for manufacturers targeting international markets and the European market in particular to obtain information about international fruit and vegetable production standards. Hopefully, new opportunities will open up for fruit juice producers of our country, as well as entrepreneurs involved in agriculture to access foreign markets after this event,” noted Natavan Mammadova, the Executive Director of AmCham Azerbaijan organization.

The event was attended by up to 50 local producers and entrepreneurs. The Forum concluded with presentations of international speakers and speech by the chairman of Agrarian Procurement and Supply Union of the Ministry of Agriculture.