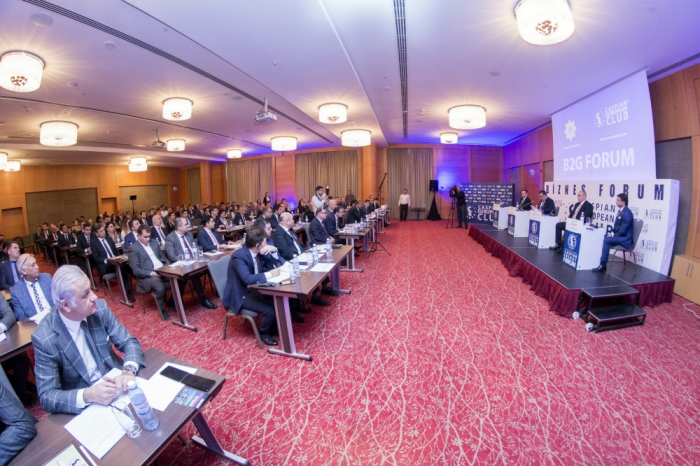 Issues concerning an expansion of the dialogue between the customs agencies and the business sector in Azerbaijan were discussed at the B2G forum conducted by the Caspian European Club in Baku on December 6 and attended by the customs service Lieutenant General Safar Mehdiyev, Chairman of the State Customs Committee of the Azerbaijan Republic.

Addressing the business forum, Safar Mehdiyev spoke about reforms introduced by President Ilham Aliyev in the customs field, about trade facilitation goals, simplification of customs procedures, ensuring of transparency, satisfaction among civilians and removal of the shadow economy. The chairman of the Committee spoke about the work carried out to fulfill the set goals, about ongoing projects, applied novelties, and informed the event participants about future goals.

Addressing the B2G forum, First Deputy Chairman and CEO of the Caspian European Club Telman Aliyev thanked Chairman of the State Customs Committee Safar Mehdiyev for a constructive dialogue, as well as for his considering suggestions and requests made by the members of the Club within the framework of the joint commissions in the course of the year and at the today’s B2G forum.

It is noteworthy that B2G forums, held by the Caspian European Club every month in Azerbaijan, Georgia and Kazakhstan, are a leading instrument for maintaining a public-private dialogue and also create additional opportunities for an international networking with top-managers and representatives of the Caspian, Black Sea and Baltic region companies.

An honorary membership certificate of the Caspian European Club was presented to Chairman of the State Customs Committee Safar Mehdiyev at the business forum. New member companies of the Caspian European Club also received certificates. Heads of public and private companies, representatives of a number of diplomatic agencies and international organizations also attended the business forum.