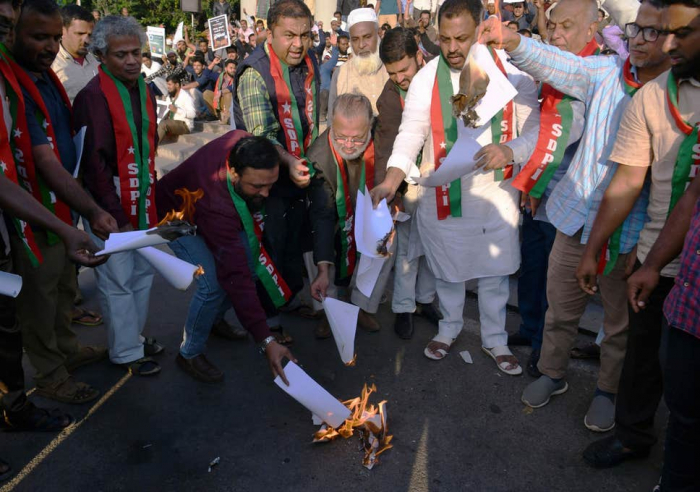 Hundreds of protesters shut down streets in northeast India on Tuesday in protest against legislation that would make it easier for refugees from neighbouring countries to gain citizenship - but only if they are not Muslims, the Independent reported.

The new bill, which the opposition Congress party said was motivated by "bigotry and narrow-minded exclusion", will fast-track citizenship claims made by migrants from Pakistan, Bangladesh and Afghanistan if they can prove they are members of religious minorities in those countries, such as Hindus, Christians, Jains and Buddhists.

India’s lower house passed the Citizenship Amendment Bill by majority vote late on Monday night. It will be presented before the upper house, the Rajya Sabha, on Wednesday before it can become law.

Rights activists and Islamic groups have strongly opposed the bill, which was brought forward in the last parliament but was allowed to lapse before the May general election.

They say the bill fits into prime minister Narendra Modi’s Hindu nationalist agenda, and have been joined in their criticism by the US government's Commission for International Religious Freedom, which called the proposed law "a dangerous turn in the wrong direction"... run[ning] counter to India's rich history of secular pluralism and the Indian Constitution, which guarantees equality before the law regardless of faith".

Meanwhile, local opposition to the bill in the north-east comes from a fear that an influx of migrants will take away from the border region’s distinct identity and culture, and dilute the political sway of indigenous tribal people.

“The north-east is already hit by large-scale illegal influx from Bangladesh and now the government is trying to provide citizenship to a whole lot of migrant Hindus and others. How can you grant citizenship on the basis of religion?” said Samujjal Bhattacharya, a leader of the All Assam Students Union.

Protesters burned tyres and blocked traffic by sitting on roads across the state of Assam, forcing shops and businesses to close.

Effigies of leaders of the ruling Bharatiya Janata Party, including Mr Modi, home minister Amit Shah and Assam's chief minister Sarbananda Sonowal were burned for their failure to oppose the bill.

Bhaskar Mahanta, Assam’s police chief, said that several protesters had been detained or arrested, but the situation was under control.

'These people need to be lynched': Outrage grows over India gang rape

Thousands of birds found dead along shore of Indian saltwater lake
Mr Modi defended the bill on Twitter, saying it “is in line with India’s centuries-old ethos of assimilation and belief in humanitarian values”.

Mr Shah also denied the bill is “against Muslims”, and said: “We will have to differentiate between intruders and refugees.

“[The bill] does not discriminate against anyone and does not snatch anyone’s rights,” he told the Times of India.

And the foreign ministry dismissed the US's criticism of the bill, with government spokesperson Raveesh Kumar saying that its statement was "guided only by its prejudices and biases on a matter on which it clearly has little knowledge".

The citizenship bill was first introduced by the previous Modi administration in parliament earlier this year, but it stalled in part due to widescale protests.

'We’ve have seen counter-productive, destructive policy by Armenia with regard to Karabakh conflict’s settlement'