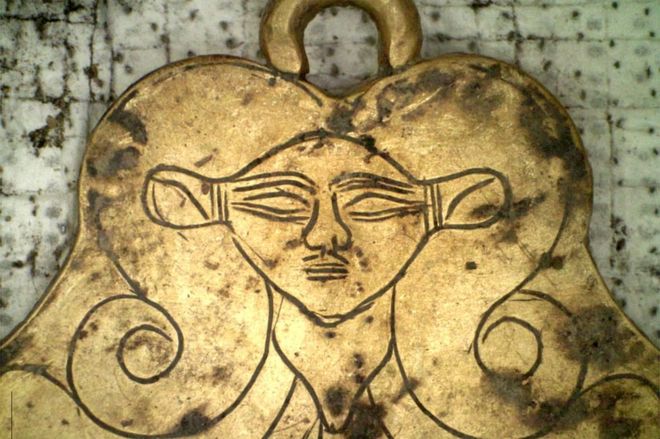 The finds include a gold ring depicting bulls flanked by sheaves of barley and a pendant showing an Egyptian goddess.

The US researchers say their discovery will provide new clues about early Mycenaean trade and culture.

The tombs are near the Bronze Age palace of Pylos, in Greece's southern Peloponnese region.

They are not far from another important grave discovered in 2015, believed to be that of an early ruler of the city.

A statement from Greece's culture ministry said on Tuesday that the dome-shaped roofs of both tombs had collapsed during antiquity, filling them with so much debris that robbers were unable to plunder them.

A team from the University of Cincinnati (UC) spent more than 18 months excavating the site and documenting the artefacts.

Jack Davis, head of UC's classics department, said items such as the gold ring depicting two bulls with sheaves of barley gave an insight into life around the Mediterranean more than 3,000 years ago.

"It's an interesting scene of animal husbandry - cattle mixed with grain production. It's the foundation of agriculture," he said.

The tombs were littered with tiny pieces of gold leaf that had fallen from the walls.

In 2015 archaeologists at nearby Pylos found the grave of a high-status man whom they dubbed the Griffin Warrior after engravings of a mythological creature engraved in his tomb.