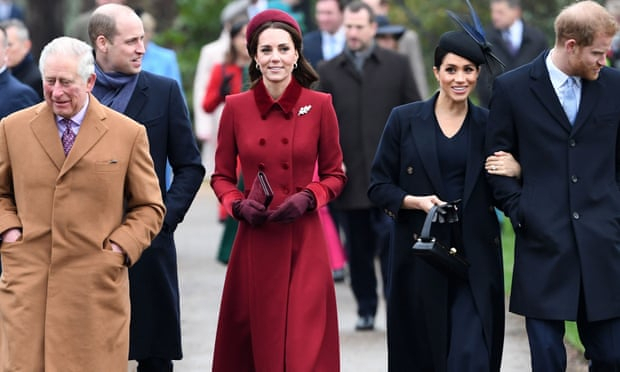 The Queen will host crisis talks at an unprecedented royal summit at Sandringham on Monday, with implications not just for the future of the Duke and Duchess of Sussex, but for other members of the royal family, the Guardian reports.

The Queen will be joined by Prince Charles, Prince William and Prince Harry – with Meghan, Duchess of Sussex, likely to dial in from Canada – and will seek to make key decisions on how the couple fulfil their desire to “step back” from frontline royal duties and become self-funding.

The crunch meeting at the Queen’s Norfolk estate comes after five days of turmoil amid claims that the Sussexes feel “driven out” of the royal family.

As the crisis continued, William expressed his sorrow over the breaking of the brotherly bond. “I’ve put my arm around my brother all our lives and I can’t do that any more, we’re separate entities,” he told a friend.

“I’m sad about that. All we can do, and all I can do, is try and support them and hope that the time comes when we’re all singing from the same page. I want everyone to play on the same team,” the Sunday Times reported him as saying.

As the beleaguered Queen attended church at Sandringham on Sunday, Charles was in Oman attending the funeral of Sultan Qaboos bin Said. He was flying back in time to attend the summit, aides said.

It will be the first face-to-face meeting between members of the royal family since Harry and Meghan dropped their bombshell on Wednesday. The couple wish to split their time between the UK and North America, to become financially independent and to be allowed to earn an income without royal constraints.

The day after the announcement, Meghan flew back to Canada, where the couple spent six weeks over Christmas with their baby son, Archie. Their two dogs are also in Canada, prompting speculation Meghan has no plans to return in the immediate future.

After days of briefings and counter briefings, the atmosphere will undoubtedly be tense. Palace sources have claimed the Queen, Charles and William had been blindsided by the timing of the couple’s announcement, and were “disappointed” and “hurt”.

But the Queen will want all personal feelings to be put one side and for the family to adopt a pragmatic approach. She is keen for a swift resolution to prevent lasting damage to the monarchy.

The Sussexes also want a quick solution, with a source saying it was in everyone’s interests that the matter be “figured out quickly, but not at the expense of the outcome”.

The issues under discussion are complex. Whatever is decided will have huge implications, including for Princess Charlotte and Prince Louis, the two youngest of William and Kate’s three children, and how they will be able to live their adult lives.

Any decisions are likely to reshape the monarchy under Charles, and provide a very different model to what has pertained during his mother’s long reign.

Sources stress that whatever progress is made on Monday, there is “genuine agreement and understanding that any decision will take time to implement”.

The royals will thrash out exactly how Harry and Meghan see their new “progressive” role. Talks will centre on how much time they intend to spend in North America and in the UK, and where Archie will be raised. How many royal duties they would undertake, and how the couple would be funded, are also key.

Questions include whether the couple should keep their titles. They want to be able to earn an income, but face the risk any commercial interests could leave them open to accusations of cashing in, or of tarnishing the royal brand.

One compromise could be a Commonwealth role. The head of the civil service, Sir Mark Sedwill, is understood to have been exploring the potential of such a role. Harry is president, and Meghan vice-president, of the Queen’s Commonwealth Trust. Canada – which appears to be the couple’s preferred base – is also a realm, with the Queen as head of state.

If the family fails to keep the couple onside, they run the risk of a no-holds-barred interview, according to ITV’s Tom Bradby, who is considered a friend of the couple.

“I don’t think that would be pretty,” said Bradby, who said he had a long heart-to-heart with Harry while in Angola making the documentary in which the couple spoke candidly of the strains of royal life.

Writing in the Sunday Times, Bradby described a “toxic” relationship in which the couple had found some members of the royal family to be “jealous, and at times, unfriendly”.

“There is no doubt Harry and Meghan feel they have been driven out,” he said. “They appear philosophical about the prospect of losing their titles, and becoming, in the end, entirely self-funded.”

The couple say they intend to retain Frogmore Cottage, their official residence at Windsor, gifted by the Queen. Critics, however, have demanded they refund the £2.4m of public money spent refurbishing it for them.

On their new website, Sussexroyal.com, the Sussexes claim they were originally offered Apartment 1 in Kensington Palace as a home for their growing family.

But it was “estimated to cost in excess of £4m for mandated renovations including the removal of asbestos”, and would not have been available to occupy until late 2020.

Of Frogmore, the website states: “The refurbishment cost equated to 50% of the originally suggested property for their proposed official residence at Kensington Palace.”